Posted by Stormy Glenn at 1:04 PM No comments:

Today has been a good day. I am very excited. I received new covers for a few of the books that will be released soon. I have one more covers that came out but one needs a little more work. I also added excerpts for several of my upcoming books on my website... http://www.stormyglenn.com/

The Kaztman's Mate
Thirty years after his father, the High Ruler of Katzmann, was murdered, Commander Chellak Rai has finally returned to reclaim his birthright. What he finds is more than he expected or could ever have hoped for.

Demyan is a bruter, one of the rare and exotic people of the planet Elquone. He is also a slave. And according to his contract, if he does not have a master, he must be returned to the cruel hands of Vortigern Vedek, the man that killed Chellak's father and stole his throne.
For Chellak, it is a double-edged sword. He knows the moment he meets Demyan that the sexy little man is his destined mate but the laws of his planet state that he can not own a slave. To keep Demyan, he must defy his own laws and beliefs. But keeping Demyan is not as easy as winning his heart.
~*~ Erotic Futuristic, M/M Romance ~*~
Coming January 22nd from Siren Publishing
~*~
Adult Excerpt
Walking quietly across the room he knelt down at Chellak's feet and grabbed his arms, pulling them away from his strained face. Knowing it was wrong for him to do so, he looked up at Chellak, reaching up with his hand to smooth back the hair at his temple.
With his fingers, he gently caressed his cheeks, trying to wipe away the lines of stress. Feeling slightly brave, and a little reckless, Demyan leaned up and gave Chellak a gentle kiss on his lips. He was totally unprepared for Chellak's reaction to his kiss.
Strong arms wrapped around him and pulled him flush against Chellak's naked chest. Chellak's mouth plundered his, his tongue sweeping in to brush against his. Hands reached under the blanket and roamed over his naked flesh.
Demyan barely registered it when Chellak picked him up and carried him into the bedroom to lay him down in the middle of the bed.
Chellak pulled the blankets completely off of Demyan and crawled over to lie between his legs. His lips reclaimed Demyan's as he pushed his cock against his.
Chellak groaned as he felt his hard cock press against Demyan's naked flesh. The warmth of his skin against his, the soft feel of Demyan's body body…it all aroused Chellak to a fever point. He had to have him. He couldn't stop himself this time. He didn't want to stop himself. He had to claim his mate.
Using one sharp claw, he sliced a small cut in his chest just above his heart. He rolled onto his back and pulled Demyan's lips to his chest, holding his mouth against the cut. "Take it, beautiful, drink from me," he ordered, groaning when Demyan began sucking at the small wound.
"Gods…yes…Demyan… " He groaned as he felt his release coming closer. He pulled Demyan from his chest. Rolling him back under his body, Chellak sank his teeth into the soft skin between Demyan's neck and collarbone, growling at the sweet taste of his mate.
Licking the small bite closed he reached into the small basket beside the bed and grabbed a small bottle of oil. Pouring a small bit on his fingers, he reached down to rub them against Demyan's tight hole.
As he softly bit down on Demyan's nipple, he inserted one finger, moving it around, stretching him until he could add a second finger, then a third. All the time he licked and nipped Demyan's soft skin.
When he felt that the tight skin around his fingers was stretched enough to not hurt, Chellak lifted his hips until his cock pushed against Demyan's hole and pushed his hips slowly forward until he felt his balls press against Demyan's ass. The feeling of Demyan's tight heat wrapped around his hard cock was pure ecstasy.
Grabbing Demyan's legs with his hands he wrapped them around his waist and held them there as he rocked his hips against him. He thrust into Demyan as deep as he could go before pulling out until just the tip remained, then thrust forward once again.
His mind a hazae of passion, Chellak hammered himself into Demyan until his cock erupted. His back arched up as he roared out his release, the knot at the end of his cock extending to lock him into place, filling Demyan with his seed.
He had never experienced the katztman's knot before but as his orgasm continued with each pulse of his cock, he was eternally grateful for it. It was something only to be shared with one's mate, reinforcing his knowledge that Demyan was his.
Demyan watched in awe as Chellak came, his head thrown back, the muscles in his neck tightened, and his jaw clenched tight. He couldn't remember ever seeing a more beautiful sight. He was bewildered as to why he felt that way until Chellak collapsed on top of him, his head buried in Demyan's neck. Chellak's tongue occasionally licked the small bite there, sending electrical shocks through out his body with each swipe of his tongue.
Just when he started to get uncomfortable with Chellak's weight, he rolled to his back pulling Demyan with him.
"Sleep, beautiful," Chellak murmured quietly as he pulled the blankets up over the both of them. He tucked Demyan's head under his chin. His hands gently stroked Demyan's back and hair.
Demyan closed his eyes, too tired to figure out what had just happened. He would worry about it in the morning. Right now, all he wanted to think about was how good Chellak's arms felt around him, how safe he felt for the first time in years.
Posted by Stormy Glenn at 8:07 PM No comments:

Cowboy Legacy
~*~
Nyssa Dupre has always been different. She's been on the move from one town to the next most of her life, never quite being accepted for who she was or what she could do.
A stagecoach trip from Philadelphia to Applegate Valley in the Northwest Territory brings changes into her life that Nyssa never imagined. Starting with the extremely handsome Sheriff Lucas Nash.
Lucas is unlike any man she has ever met. Besides being domineering and sexy as hell, he decides Nyssa is the woman for him and his two brothers, Royce and Ian. For them, and the rest of Applegate Valley, it's normal to share a woman.
Finding out that her family comes from Applegate Valley and that she has inherited the family estate just adds to her problems. It could mean she has to settle down in one place and accept the fact that in Applegate Valley, her ability to manipulate air makes her normal.
But there are those that have their own plans for Nyssa. She turns to Lucas, Royce, and Ian to protect her. But can they save her from people that won't take no for an answer?
Posted by Stormy Glenn at 7:55 PM No comments: 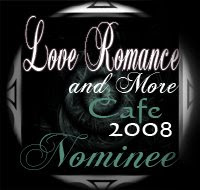 Forbidden Desires has been nominated for the Best Shape Shifters Book 2008 at Love, Romance, and More Cafe. Voting begins at 11:59 A.M. ET on January 5th, so please stop by and vote here!
Stormy
Posted by Stormy Glenn at 3:30 AM No comments: