Life has settled down for each of the Blaecleahs. They’ve all found their legends and are living a life filled with love and happiness. But anything worth having is worth fighting for and not even the luck of the Irish can keep the Blaecleahs from having to fight to keep what they have when the past comes back to haunt them all.
In order to save Ma and Da, they may have to decide who they want to keep in their family, and who they don’t before that choice is taken away from them by someone they never expected.
When violence threatens them, aid comes from an unusual source but will it be enough to keep the Blaecleahs in Cade Creek or will the life they have built for themselves disappear before their eyes?
http://www.stormyglenn.com/cowboychristmas.htm


ADULT EXCERPT
"Harder!" Lachlan squeezed his eyes shut as he dug his fingers into the sheets. He spread his knees and tilted his ass up even further into the air, needing the pounding Asa was giving his ass. No one fucked like his Asa. The man gave new meaning to the term ecstasy. No matter what Lachlan had asked for over the years, Asa provided it.
"So tight, Lany," Asa groaned, the deep needy sound music to Lachlan’s ears.
Lachlan spread his legs farther apart as he rocked his ass back and up, wanting Asa to fuck him until he was unconscious. Lachlan’s fingers curled into the sheets as Asa hammered into him. It was raw, fast, and made Lachlan’s head swoon. He keened and mewled, begging his lover to take him harder.
Asa didn’t disappoint.
He moved faster and faster with each deep thrust, achingly deeper. Fingers dug into Lachlan’s hips as Asa switched his position, tagging Lachlan’s prostate on every damn stroke. Lachlan’s body tingled and buzzed, his heart beating faster as he felt an all too familiar tingling shoot up his spine.
Lachlan was getting close. He could feel his balls drawing up tight against his body. He knew he only had mere moments before he flew over the edge with abandon. His cries and whimpers filled the room, overshadowing their heaving panting. The harder Asa rammed into Lachlan, the louder his cries became. Sweat dropped down both of their bodies, the sounds of their flesh slapping together with the cries of pleasure.
"Harder, damn it," Lachlan growled. "Fuck me like you mean it."
He arched his body toward Asa as his orgasm roared up his spine and down to his groin, and then his cock exploded, wetting the bed with his seed. Lachlan cried out, his entire body throbbing with his release.
"Lachlan!" Asa shouted as he slammed into Lachlan’s ass, his fingers digging in so deeply that Lachlan knew he was going to have bruises. Lachlan felt a series of short thrusts and one long one where Asa drove up into his ass and stayed there. Hot liquid filled his ass, each powerful spurt shooting against his sweet spot, making Lachlan’s vision dim as even more pleasure continued to weave its way through his body.
Lachlan rocked back and forth, bathing in the release that had had him hazy and sated. Little tremors rocked through him, prolonging his pleasure until Lachlan thought he was going to pass out.
He closed his eyes and laid his head down on the bed, unable to do anything but breathe, and even that was taking effort. He smiled weakly when he felt Asa plant a small kiss on his temple.
"Thank you, babe."
Lachlan opened his eyes and grinned up at the man that had become his husband just a few years earlier. He leaned up and brushed a small kiss across Asa’s lips. His eyes twinkled with amusement as he replied, "My pleasure."
Asa chuckled as he slid from Lachlan’s body and rolled to the side of the bed. He quickly went to the bathroom and then came back a moment later with a washrag to clean Lachlan up. After chucking the washcloth back into the bathroom, Asa sat on the side of the bed and reached down to thread his fingers with Lachlan’s.
"We need to get up, babe," Asa said. "Da is waiting for us to help him with the cattle."
Lachlan groaned and rolled over to bury his face in his pillow. He could lie all day in bed with his husband—and he wanted to. "Don’t wanna."
"You’ve tried that excuse before and we ended up with a wet mattress after Da took the hose to you. I’d really prefer to keep this one dry." Lachlan smiled into his pillow and the smile grew wider when Asa’s hand came down on his ass. Lachlan pushed up, silently begging for more. He would never get enough of the gorgeous man.
He loved having Asa’s hands anywhere on his body.
Posted by Stormy Glenn at 5:00 PM No comments:

AVAILABLE FOR PRE-ORDER: Forever and a Day 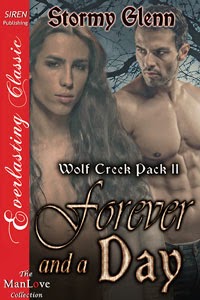 FOREVER AND A DAY

Samuel Erickson, a human and former blood slave, hates vampires with a vengeance.  He doesn’t trust a single blood sucker, except for maybe Sully, the vampire that saved him. But trusting someone and giving in to the desire that burns within every time he’s around the handsome vampire are two distinctly different things. When their lives are threatened and they have to fight side by side just to stay alive, the hatred Samuel harbors seems less important.

Sully Buckley, a vampire, despises humans just as much as Samuel hates vampires. Nothing good could ever come of their association. Sully has been telling himself this since he first set eyes on the frightened human. To his dismay, he was finding it harder to remember those reasons the more time he spent with Samuel.

Despite the issues between them, nothing can prevent Sully from running to the rescue when they are attacked by soldiers sent by Samuel’s father. When betrayal comes from within their ranks, Sully knows he has to put aside his hatred and fight for his mate or lose him forever, and he desperately wants forever and a day.

Posted by Stormy Glenn at 2:54 PM No comments: