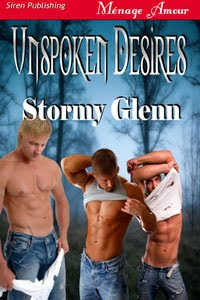 Daniel James, required by his alpha to attend a wolf council meeting at Vourdala Island, never expects to run into his mate, Brom McGregor. Several years ago Brom kicked him out of their pack saying he would never mate him, that he didn’t love Daniel. Running into Brom is almost more than he can handle when he knows he still loves the man.

Brom McGregor is shocked to see Daniel, the man he’s always loved and never forgotten. He’s even more shocked when his jealousy makes him to claim Daniel as his mate, especially since Brom is already married with two small children. To add to Brom’s problems, there’s a third mate, Jaryn, that Daniel doesn’t even know about, one that Brom has spent their years apart protecting.

Faced with a hunt to the death ordered by his father because he mated Daniel, Brom is forced to flee with his two small children and Jaryn. The only place he can think to go is to Daniel. Can he convince Daniel that he sent him away all those years ago to save his life even knowing that he’s putting Daniel in danger again? Will Daniel forgive him in time to save Jaryn’s life?

For the adult excerpt, or more on the Tri Omega Mates series, visit my website at http://www.stormyglenn.com/
Posted by Stormy Glenn at 11:33 AM No comments:

DARK SIDE OF THE VEIL 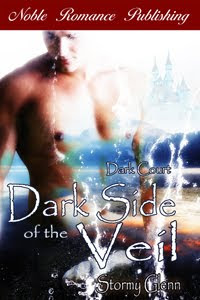 Dark Side of the Veil

Zack Banning hasn't had an easy time of it recently. After spending more than fifteen years in the Marines, he's discharged due to a head injury received in combat. With no missions to run or people to save, it's all he can do to get out of bed in the mornings. The pills the doctors have him on to keep his injury-induced delusions at bay don't help the situation.
When he discovers a young man being accosted outside of a bar one night he sees it as a chance to feel the satisfaction of saving someone once again. He just doesn't realize until it's over that the young man came to the bar to warn him that someone is out to kill him. What Eljin tells him is a story so outlandish, Zack begins to wonder if he's having one of his delusions. Because if Eljin's story is true, the entire foundation of everything Zack believes just flew out the window.
Fleeing through the countryside with Eljin, Zack tries to understand everything without telling the man he's nuttier than a fruitcake. But the more time Zack spend with Eljin, the more he wants him until he can't think of ever being separated from the little elf.

Secret Desires
Tri Omega Mates #1
How do you answer a handsome cowboy when he asks if you want to take a ride on his horse, especially when he guarantees that it will be a wild ride? For Leyland the answer is simple: Hell, yes! But what if his cowboy already has a lover?

Forbidden Desires
Tri Omega Mates #2
Gregory had been waiting for over six years for Ryland to grow up so that he can claim him. When he finally does claim him, Gregory learns that by doing so, he has endangered Ryland's life. Ryland is a Tri-Omega and needs two mates to keep him grounded and safe. And he hasn't found his other mate yet.
Available Now!

Hidden Desires
Tri Omega Mates #3
Thomas is driving across country when he discovers Micah, a human that smells like dark chocolate and summer rain. He knows immediately that Micah is his mate, but before he can claim him, he has to get his sexy little butt out of trouble.

Stolen Desires
Tri Omega Mates #4
Cary is a tri omega. Without two mates he will die, so he's excited when he finds his mates, Ryce and Saul. But what happens when Saul refuses to claim him? Could Saul really be as cold hearted as he seems or is he hiding a dark secret?

UNSPOKEN DESIRES
Tri Omega Mates 5
It's time for Daniel to find his mate. The problem is, he already has and the man doesn't want him. But when Brom comes to him, bringing along another mate and two small children, can Daniel forgive him in time to save them all from someone bent on killing them all? 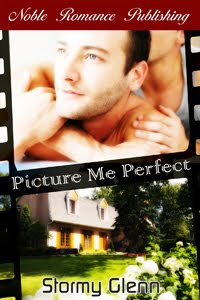 Troy Summers is a cop. He's recently been partnered with fellow police officer, Jamie Everson, and they get along great. He likes Jamie's brother, Nicky, even more.

When Nicky gets beaten up by his ex-boyfriend and comes to him for help, Troy can't say no, not when it brings Nicky right into his arms. Even still, Troy wants to take things slow with Nicky. He knows they have a connection but he wants to build a relationship with him, even if it means hiding it from Nicky's brother and the rest of the world.

But when Troy gets shot during a drug bust, all bets are off. Their secret relationship comes out. It not only lets everyone know that they've been living together, but brings Bruce back into the picture. Jamie and Troy have to work together to save not only Nicky but themselves but can they save Nicky in time or will Troy lose the most intriguing man he's ever met?

EXCERPT
A quiver surged through Troy as the man reached out to him, his delicate hand gripping Troy’s. Troy watched the man turn his hand over then he grabbed Troy’s other hand, turning this one over as well. He was confused by the man’s movements but refused to break the sensuous spell that grew between them.

“No ring.” The man’s voice held a gentle softness that wrapped around Troy and gave him a sense of peace he couldn’t remember ever feeling. “Boyfriend? Significant other? Lover?”

Troy shook his head, afraid to put sound to his response in case it stopped the sexy little man from doing whatever he wanted to do. No, he most definitely did not have a boyfriend, significant other, or lover. But he was willing to entertain the possibility.

Troy nodded, unable to tear his hungry gaze away from the gorgeous face in front of him. The man’s hand rested on his chest at the opening of his button down shirt. His fingers twined in the soft smattering of brown hair visible there.

“This is very sexy. Is there more?” The man shuddered when Troy nodded. “I’d really like to find out where it leads.”

This time, Troy shuddered. The mere idea of this man discovering where the trail of hair down his chest and abdomen led to made Troy’s cock so hard he hurt. “I’d love to show you,” he murmured.

“My name is Nicky but you can call me anything you want.”

Troy smiled and reached for the man. “My name’s Troy. I’d like to call you swe—” The smile suddenly fell from Troy’s face as the man’s name sank into his foggy brain. “Did you say your name was Nicky? As in Nicky Everson?”

The man’s head tilted to one side, a frown making his dark brown eyebrows draw together. “Yes, my name is Nicky Everson. How did you know?”

“Well shit!” Troy exclaimed as took a step back until he’d put a respectful distance between them. “I’m Troy, Troy Summers, Jamie’s partner.”

Nicky looked confused for a moment then his mouth suddenly dropped open and his face grew pale. He took his own step back from Troy. The distance between them seemed as wide as the Grand Canyon. “You’re Jamie’s partner?”

The sensuous light that sparkled in Nicky’s eyes since he walked in dimmed, leaving behind a dull blue that tore at Troy’s heart.

“I’m sorry,” Nicky whispered, his head dipping down toward his chest. “I didn’t know who you were. Please forgive me.”

Troy reached for Nicky, stopping when the man jerked back. “It’s no problem.”

“He went to the bathroom. He should be out any second.”

Nicky’s delicate hands fluttered at his neck as his gaze darted around the room. “I guess I’ll just go wait for him over here.” Nicky took a few steps away then paused, glancing over his shoulder at Troy. “It was nice meeting you.”

Troy nodded, at a loss for words. He felt Nicky’s departure like an open wound in his chest. He wanted to cry out in frustration as he watched Nicky cross the room, leaving Troy standing more alone than he ever felt before.

For more information on this book, to read the adult excerpt or to learn about the sequel, Sammy Dane, visit my website at http://www.stormyglenn.com/ 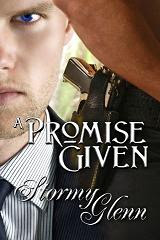 Detective Cooper Thomas was kidnapped and tortured by a psychotic serial killer bent on revenge. If that wasn’t bad enough, Alec Whitley, the only man Cooper ever really loved, the man that left him ten years ago without a word, came back just in time to rescue him.

Now, six months later, Alec wants to discuss their past and plan their future. But before Cooper can come to terms with Alec being back in his life he has to discover who’s killing young gay men before he and Alec become the next victims.

For more on this book, to read the story and adult excerpt, visit my website at http://www.stormyglenn.com/
Posted by Stormy Glenn at 7:13 PM No comments:

BOOK OF THE MONTH AT DARK DIVA REVIEWS 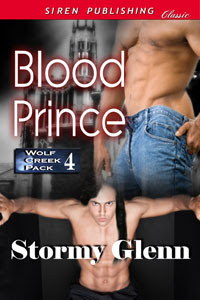 Blood Prince is up for Book of the Month at Dark Diva Reviews. Readers have one week to vote for their favorite book. If you enjoyed the book, please stop by and cast your vote.
Voting is open from Monday, February 1 until Sunday, February 7 at midnight EST
http://darkdivasreviews.webs.com/bookofthemonthpoll.htm
Stormy
Posted by Stormy Glenn at 5:27 PM No comments: