Welcome to the world of Phanta City, where normal is overrated and weird is embraced with open arms. Paranormals rule the world with humans as mere blood donors and pets. In a world dominated by supernatural creatures, anything is possible.
http://www.stormyglenn.com/phantacity.htm

Posted by Stormy Glenn at 2:51 AM No comments: 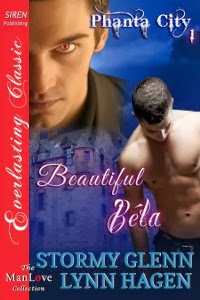 Phanta City 1
Coming February 27th, 2014
Count Vladimir Dracul never suspected that the human he found hiding in his stables would change his life and the way he saw the world. But once he found Béla, Vlad couldn’t give him up. Fighting prejudices against humans, a vampire Count wanting his blood donor back, and a threat from an old enemy seem like small battles compared to the one he has to fight to win Béla’s heart
Béla was terrified of the vampire that found him and decided to keep him. His experience with vampires has never been good so he had no reason to trust Vlad, even if he wanted to. But when his former owner comes looking for him, Béla has to find the courage to save the one man that has come to mean more to him than his freedom.


With the help of a few crazy friends, a werewolf mob boss, and two insane brothers, Vlad and Béla just might have a chance at happiness…if the Ministry of Paranormal Affairs doesn’t get to them first.

ADULT EXCERPT
“Bela not share Vlad?” Clearly it was a question and not a statement. Béla wasn’t brave enough to make it a statement.
“I should hope not!”
Béla was so overcome with joy that he grabbed Vlad’s face between his hands and kissed the vampire. It wasn’t until he felt Vlad’s tongue brush against his own that he realized what he had done, and he slowly pulled back, watching Vlad’s reaction carefully.
“Don’t stop now, Béla,” Vlad said with a grin. “That was just getting interesting.”
Never before had Béla even considered taking such liberties. He had never wanted to. Sex had been nothing more than grunting and mounting. It was Vlad who had taught him that sex could be tender, not rough. Taking in a deep breath, Béla leaned up and closed his eyes, brushing his lips over Vlad's the same way the vampire had done to him.
"Béla." Vlad's voice was a mere whisper, but held so much passion, so much fire that Béla threw caution to the wind and grabbed tufts of hair, pulling Vlad closer. Vlad's breath skimmed across Béla's cheek before Béla closed the distance, pushing his tongue inside the man's mouth.
Vlad let out a low groan, the razor clattering to the sink as Vlad wrapped his arms around Béla's body. The shaving cream smeared between their faces, but Béla was too lost in the aching need coursing through his body to care. The only thing he cared about was being in Vlad's arms.
"I need you, my beautiful Béla."
A shiver of sensual heat had Béla moaning in agreement. His cock was a wedge of hard steel, straining in his pants as he opened his mouth to say, "Béla need Vlad."
Vlad licked at his lower lip, his hands gripping Béla's hips tightly. A sharp breath exhaled from Béla's lungs at not only the sensation of Vlad's erection poking him in his side, but at the heat he could see scorching the man's eyes.
Vlad's tongue trailed down Béla's neck, making Béla arch back, letting out a low moan. There was nothing so sexy, so completely filled with driving lust and sensual excitement as the man kissing his way across Béla's throat.
His breathing became ragged when Vlad pulled away and spun Béla around yanking Béla's pants down to his ankles. He could have sworn he hear an animalist growl fall from Vlad's lips.
He was bent over the counter with his ass pushed out and his hard cock jutting between his legs. Béla heard Vlad's zipper lower, and then the man grabbed Béla's hips.
Vlad's hands were shaking.
Béla had never been more turned on in his life. His body ached to be filled, to feel Vlad's hard cock pounding deep in his ass.
"Hard and fast, Béla," Vlad panted as his fingers dug deep into Béla's hips. "Brace yourself.”
Béla groaned as Vlad's cock sank into his ass. His head spun and his pulse raced as his skin stretched wide. Béla's lips parted as small, panting noises escaped.
Vlad had the best dick in the world. It wasn't too big, wasn't too small. It fit perfectly inside Bela's ass, filling every inch of him until he wanted to scream out his pleasure. He opened his eyes and looked into the mirror, seeing the sexual haze in Vlad's red eyes. A course of lust shot through Béla groin, making his cock throb with his heartbeat as Vlad's fangs became prominent.
Béla had to slap his hands against the tiled sink backdrop to keep from sliding forward as Vlad slammed into him from behind. The hands digging into his hips only added to the pleasure rocketing through Béla.
The scent in the air was wild, untamed, and pulled at Béla's heart. He had gone from hating vampires to loving Vlad to the depth of his soul. Pushing his legs further apart, Béla damn near climbed onto the counter, wanting to feel Vlad go deeper.
"You are truly a beautiful creature," Vlad said as he scrapped his fangs along the nape of Béla's neck. "So exquisite."
"Vlad, please," Béla groaned as he reached back with one hand and wrapped his arm around Vlad's neck. He wanted to feel Vlad's fangs sink into his flesh. He wanted to be claimed again.
Béla cried out when Vlad's teeth sank into his neck. His cock jerked once then painted the front of the counter with copious amounts of cum. Pleasure inflamed Béla until spots danced in front of his eyes.
"Béla!" Vlad shouted as his thrusts grew faster, deeper.
Béla grunted as he felt pulse after pulse of Vlad's release filled his ass. There was nothing else on earth like knowing he had brought his vampire pleasure. It was a heady feeling, a powerful feeling.
Posted by Stormy Glenn at 2:48 AM No comments: 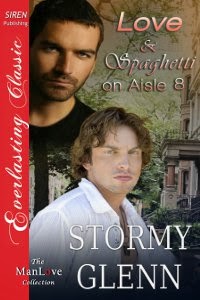 
Captivated Lovers 2
Coming February 13th
Seth O’Connal is leery of dating, especially after being used by previous love interests to get closer to his best friend’s billionaire husband. When he’s approached in the supermarket by a handsome Italian offering to make him homemade spaghetti, Seth can’t help but say yes, even if he’s hesitant. When their first date rocks Seth’s world, he wonders if sharing his secret is the next step or if he should keep it to himself.
Detective Frank De Luca is enchanted by Seth. The man seems to be just about perfect. Afraid of scaring Seth off, he wants to get to know him better before spilling the beans about his dangerous line of work. Called to the scene of a bombing, Frank is shocked to learn that the victim is none other than his Seth. But finding out who is after Seth might be easier than accepting Seth’s secret.


"You know that stuff will kill you, right?"


Seth looked up from his squatted position in front of the numerous jars of premade spaghetti sauce to see a long set of jean clad legs standing beside him. He followed the well muscled legs all the way up past a flat abdomen and wide muscular chest to the sexiest chiseled face he'd ever laid eyes on. There was even a hint of dark stubble on the man's square jaw.


Seth cocked an eyebrow at the man as he looked up at him. "You have something better in mind?"


"I might," the man said and then he grinned, his face showing off the most delicious looking dimples, one on each cheek.


Seth flushed when the sudden ache to lick those dimples almost overcame his common sense. The man that stood before him was very obviously fit. While Seth could hold his own in most situations, this guy could probably wipe the floor with him.


Seth knew he needed to tread carefully. The invitation seemed to be there in the man's sparkling blue eyes but Seth had been wrong before and paid the price in bruises and sore muscles. The man might not even be gay.


The stranger held out his hand. "The name's Frank, Frank De Luca."


Seth took the man's hand, standing to his feet. He shook it for a moment then let it go, wishing he didn't have to. "Seth O'Connal."


Frank gestured to the jar of premade spaghetti sauce Seth had been looking at moments before. "Do you always eat processed food? Homemade is so much better."


"Not good with your hands?"


One dark eyebrow arched and then the dimples came back as Frank smiled again. "Just what can you do with your hands then?"


Seth was ready to come in his jeans right where he stood. The most gorgeous man in the universe was coming on to him. There just couldn't be any other explanation. The signals the guy threw out were too well placed.


"Oh, I'm very good in the kitchen," Frank replied. Seth felt the man's eyes move down his body like a scorching heat. He was growing hard right there in aisle eight of the supermarket. "I like handling hot stuff."


Seth almost groaned. He only stopped himself by biting his lower lip. A moment later he wasn't so lucky when Frank reached out and rubbed his thumb across Seth's caught lip until he let go of it.


"Now, if you go and hurt your lip how are you going to be able to enjoy my homemade spaghetti sauce?" Frank asked.


"Wh-When?" Seth felt like a goober, unable to put a simple word together but all he could think of was the way that Frank's thumb felt on his lower lip. He wanted to feel it on other parts of his body.


Seth nodded and dug into his pocket. He handed it over when Frank reached for it, watching mesmerized as Frank punched in a bunch of buttons. When Frank stepped closer as he handed it back, his phone number was typed in along with his name.


"Call me and we can make arrangements."


Seth nodded again. He was having a very hard time thinking clearly. Frank's cologne surrounded him and it smelled wonderful. Seth could just smell an underlying scent of masculine musk. It made him ache with need and forget all about eating spaghetti. He wanted something else in his mouth.


"Are you going to call me, Seth?" Frank asked very quietly.


"Are you going to make me spaghetti?" Seth countered.


"I'll make you anything you want."


"I'll be waiting." Frank grinned, sporting his deep dimples once again. The back of his hand brushed the side of Seth's face then quickly fell away before anyone could see. "I want to know what you can do with those hands of yours."


Seth's jaw dropped as he watched Frank walk away. Correction, the world's most perfect ass walked away. A tight rounded ass encased in even tighter blue jeans. Frank was a gay man's wet dream. He'd certainly be in Seth's dreams tonight.

Posted by Stormy Glenn at 6:27 PM No comments:

WRITE ON THE EDGE

Write On the Edge Show


http://www.blogtalkradio.com/writersonlinenetwork/2013/12/06/write-on-the-edge-w
Posted by Stormy Glenn at 4:29 PM No comments: