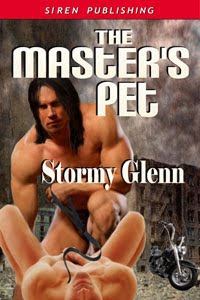 The Rape of St. Peter 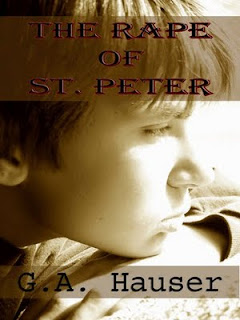 BUY YOUR COPY TODAY
Sometimes in life there are no happy endings.

Seventeen year old Peter Barnes is a student of Fair Lawn High in the 1970’s. His parents divorced after a violent marriage, his older brother Keith is constantly high on drugs, his younger sister Jackie seems the only one relatively sane, and Peter is lost.
Peter hides in plain sight, avoiding making friends for fear of the pain of separation.
Disaster strikes Peter when he meets a beautiful older woman, Wendy Saunders and loses his heart to her instantly.
Widowed, Wendy had married a rich old man and now craves the youth she missed. Unfortunately her yearning for Peter turns out to have dire consequences.
This story is set in two parts, Book One, Peter’s youth, and Book Two, ten years later.
Sample Chapter for The Rape of St. Peter:

Keith stood in front of his mirror smoking a joint naked. After he held each breath, he leaned out of his opened window to exhale outside to prevent the smell from lingering inside the house. He snuffed the roach out in his fingers and placed it into a silver case.
Keith took a brush to his hair, fluffing it, shaking it full. He rested his hands on his dresser and stared at his face. “I wish my eyes were green.”
He jumped on his bed to be able to see his entire body in the mirror. “Yeah, nice bod.” He grabbed his cock and started to work on it as he stared at his reflection.
When the sensations rose to a climax, Keith closed his eyes, falling to his knees on his bed. He shot out ribbons of come and grunted and jerked his hand faster.
The sound of the door and a choking cough brought Keith around. Keith opened his eyes slowly to see Peter staring at him.
“Hello, pretty brother.” Keith milked his cock.
Peter jumped out of his skin like he was caught spying. “Sorry!” Peter backed away and shut the door.
Keith smiled wickedly and used his thumb to wipe the last creamy drop from his slit.
After he washed up, Keith rolled a few more joints and dressed in a tight pair of blue jeans and a black muscle T-shirt. He dabbed some cologne on his neck, then raised his shirt so he could rub some on his chest to his flat muscular belly. He ran a sock over his boots to polish them, then checked out his clean shaven face in the mirror and winked. Lastly, he found his leather jacket and strutted down the hall.
Keith stopped at Peter’s door and opened it quickly, trying to catch him in a similar act.
Peter jumped at the start.
“Reading? That’s what you do with the door closed?” Keith tilted his head at him comically.
Peter smiled awkwardly. “Well, I know what you do.”
“Heh, heh.” Keith grinned wickedly.
“Get lost.” Peter waved him out.
“Right. See ya twerp.” Keith winked at him and hopped down the stairs with a jubilant bound.
“Where are you going?” Louise asked, checking the time.
“Out. I’ll be really late, so don’t wait up.” Before his mother could respond Keith waved good-bye and walked out into the night air. He opened his joint case and stuck one in his mouth, lighting it. Inhaling and holding it in as long as he could, he blew out the smoke in a thin blue cloud.
Keith strolled passed a few houses as dogs barked at him in alarm. A car turned down his street, its headlights blinding him as he crushed the joint out in his fingers. It stopped and the passenger door swung open.
Keith climbed in and smiled at Steve. “Hey.”
Giving him a good once over, Steve licked his chops at the sight. “Hey back. You look positively edible.”
Knowing he did, Keith grinned and shook back his hair seductively, then he held up the rest of the joint. “Want some?”
“No, I don’t smoke it anymore. Trying to keep the lungs clean. You can though.”
“I already had a hit.” Keith stuck it back in his case put it into his jacket pocket. “So, where’s this party?”
“In the City. It’s at a very good friend of mine. Terry.”
When warmth covered his thigh, Keith glanced down at Steve’s hand. “Am I supposed to be your date?”
“Christ, I’m very tempted to turn around and have you all to myself for the night.” Steve said. “I’m thinking about it very seriously. God, you are too much.” Steve squeezed Keith’s leg tightly and rocked it side to side.
Keith flipped down the visor to stare in the mirror. “Yeah, I do look pretty fantastic, don’t I?”
“And modest?”
“Fuck modesty. How about honesty?”
“God, I love you.” Steve laughed.
“Christ! Now you love me?” Keith peeked down at the masculine hand that hadn’t moved from his leg and if anything was getting friendlier. “Anyway…what’s Wendy up to tonight?”
“You don’t want to know.”
“Let me guess, a date with my old man?”
“Mad?”
“Nah. I just might have to find myself a new babe at the party tonight. Mad?” Keith grinned demonically and stared back at Steve.
“Nah! Good luck.”
“There will be women there, right? This isn’t a queer party, is it?”
Steve’s smile broadened. “You should do very well. There will be plenty to choose from.”
Knowing Keith was cock-teasing Steve, Keith raised Steve’s hand from its grip on his thigh and stuck Steve’s middle finger into his mouth.
“Holy fuck!” Steve almost lost control of the vehicle he was so shocked.
Keith roared with laughter. “Shit. It takes nothing to turn you fags on.”
Steve caught his breath and focused back on the road as they merged onto Route 4’s entrance ramp. “Keith, you gorgeous motherfucker, you said a mouthful.”

I'm part of the m/m theme days at the Loveromances and More blog.

Here is the link to my guest blog
http://loveromancesandmore.blogspot.com/2009/08/welcome-to-stormy-glenns-guest-b\log.html

Maybe you will stop by and say hello...

Stormy
Posted by Stormy Glenn at 2:44 PM No comments:

5 CUP Review for JUST A TASTE OF ME 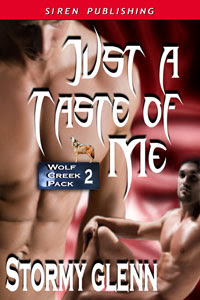 JUST A TASTE OF ME

However, Keeley is unlike any man he has ever met, from the top of his gorgeous honey blond hair to the bottom of his fire engine red painted toenails, Keeley is hot! Reece becomes even more enchanted with his new mate when Keeley loses his temper with Reece and hits him with a cookie sheet.

Just when Reece accepts being mated to a man and starts to care for him, Keeley is attacked and nearly dies. Reece discovers a plot that involves more than just the death of his mate, but his entire pack. Can Reece save Keeley and his pack, or will he have to choose between them?

Review
Keeley is a human with a little something extra; he has visions of things before they happen. He has been recently rescued from a horrible man called The Teacher who used Keeley's abilities for his own profit.

Reece is the alpha of a small pack of thirty werewolves, and as far as he is concerned he is straight as an arrow. Well, until he gets his first whiff of Keeley that is!

When Keeley has a strong feeling that he must enter a bar, he goes with it and figures he will just use the restroom and then be on his way. Unfortunately, a bloodsucker also follows him into the restroom with the intention of getting a blood donation from Keeley whether Keeley wants to donate or not. Fortunately for him, Reece cannot keep his eyes off Keeley nor his hormones under control, smelling trouble, he follows Keeley and the bloodsucker into the restroom. Reece saves Keeley but in doing so he has made Keeley his mate, a fact that Keeley is less than enthusiastic about, particularly when he discovers that Reece is straight. While they try to sort out their feelings for one another and their mutual wild attraction, there are those within Reece's pack with their own agenda, and Keeley's very existence is cramping their style. Will Reece be able to protect Keeley from those who mean him harm, as well as convince Keeley he wants to keep him forever?

Wow, talk about your fantastic sequel, this series just keeps getting better and better! Ms. Glenn really threw me for a loop with the whole straight guy falls for gay guy thing, but like the great writer she is, she had the perfect reason that made it all totally plausible. The world building in this series and this sequel is par excellence, and I am really looking forward to more stories. I really enjoyed how Ms. Glenn wrote the character of Reece, and his confusion over his instant attraction and nearly instant love for the admittedly adorable Keeley. I also liked the added dimension of the bloodsuckers aka vampires, they definitely added some real zest to the story. The lovemaking is positively scorching, and gives added depth to the emotions expressed between Reece and Keeley. I for one am anxiously awaiting the next book in this series, and all I can say is "Keep them coming Ms. Glenn, keep them coming!"