Stavros Siracusa traveled the world collecting antiques and artifacts that were hard to find. He built a reputation as the go-to man when someone was looking for something specific. But he had no idea he would find a gargoyle statue at a garden party in his own hometown that it would change his entire world.
When sorcery interfered in finding his Beloved, Xander willingly allowed the Gods of Olympus to place him in hibernation as a stone statue. A drop of his Beloved’s blood and the strong beat of his heart drew Xander from his deep slumber and tossed him into a world that is more dangerous than any battle he has ever fought.
Armed with the knowledge that they were meant to be together, Stavros and Xander accept the fate of the Gods. But the Brotherhood is up to their old tricks and betrayal will come from within, tearing the two lovers apart. When Stavros gets kidnapped, Xander isn’t even sure the Gods can save the most precious thing in his world—his Beloved.
http://www.stormyglenn.com/preciousfate.htm
Posted by Stormy Glenn at 12:43 PM No comments: 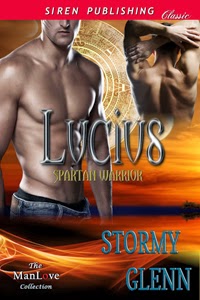 [Siren Classic ManLove: Erotic Alternative Futuristic Romance, M/M, sci-fi elements, HEA]
Lucius is Spartan, a genetically enhanced soldier created for the sole purpose of fighting. But what is he to do when the war is over? Exiled with his unit to an island off the Pacific coastline, Lucius is shocked when he finds more than a deserted island when he meets Ari, a man determined to live by his own rules even at the cost of his own life.
Ari was just a teenager when he was abandoned by his family and exiled because he didn’t meet the new moral code. He does what he needs to do to survive. When he meets Lucius and the other Spartan, he finds that the fierce warriors need even more help than he does.
Emotions have been drummed out of the Spartans, deemed useless to men taught nothing but killing. Teaching them to feel just might be harder than Ari thinks, especially when he needs Lucius to be the killing machine he was born to be in order to save them all when the enemy attacks. But the cost might be the man he is falling in love with.

http://www.bookstrand.com/lucius-spartan-warrior
Posted by Stormy Glenn at 11:55 PM No comments: