COMING SOON: Fit To Be Tied 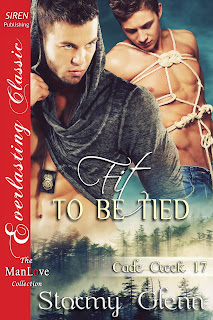 Fit To Be Tied
Cade Creek 17
AVAILABLE FOR PRE-ORDER!

DEA Agent Dan Wilson was just looking for a place to rent. He had no idea that it would bring him the love of his life. When he rented a room in an old Victorian just blocks from work, trouble started the very first day. For one, the guy who rented the room to him wasn't the owner. Waking up in bed with Terry wasn't the worst morning he'd ever had, but learning he had been taken for a fool kind of was.

Terry Iverson is incensed when he learns one of his tenants rented out his bedroom to a stranger, the bedroom he'd lived in his entire life. Of course, if he was going to choose someone to share a room with, it would be the handsome DEA agent. It would be great if he was gay, but Terry was a little too afraid to ask. He was the guy's landlord after all.

When someone starts messing with Terry's life, going from making false accusations of sexual harassment against him to trying to kill him, worrying about dating his tenant seems minor in comparison. If he can make it out of this alive, he just might see if the sexy agent was interested in something more than being roommates.

Terry groaned as he stretched his legs as far as they would go and flexed his toes. He must have slept forever. He felt better than he had in a very long time. He didn't even remember having any nightmares last night. It wasn't often that he went the whole night without at least one nightmare waking him.

Despite the wintery conditions outside, he was toasty warm. The blankets all wrapped around him and the warm solid body behind him. Terry yelled as he jerked and rolled off the bed, landing on the floor with a solid—and somewhat painful—thud.

There shouldn't be a warm body anywhere near him.

A head appeared over the edge of the mattress. If he hadn't been so freaked out, Terry probably could have enjoyed the amused smile on the man's handsome face, but as it was… "Who in the hell are you and what are you doing in my bed?" Terry snapped.

The arched eyebrow was aggravating.

"I'm pretty sure I should be asking you that question," the stranger said. "I believe you are in my bed, not that I mind, but…"

"Look—" It wasn't until he stood and the man's eyes roamed over him that Terry remembered he was naked. He quickly pulled the top blanket off the bed and wrapped it around his hips. His face flamed. "Look, this is my room. It has been my room since before I was born. You're the trespasser here."

The man frowned. It was the first sign that he'd shown that something might be wrong. Apparently, he was used to naked men waking up in his bed. "Hey, I rented this room fair and square. I have a rental contract and everything."

The guy stared for a moment before rolling to the other side of the bed. Terry caught his breath when the man stood, the blankets sliding away as he started across the room. Had there ever been a more perfect ass ever created? Terry didn't know what this guy did for a living, but he could make a mint as an underwear model.

And, apparently, he wasn't shy. After grabbing something out of his jeans, he walked right back. Sweet mother mercy, the front was just as perfect as the back. Terry was pretty sure when God was handing out dicks, this guy got in line twice. Maybe three times. Nice and long, and just thick enough to make someone really feel it.

It really had been a long time.

"I signed that when I rented the room two days ago."

Terry regretfully tore his eyes away from Mr. Perfect Dick and stared down at the papers in his hand. It took his befuddled brain a few moments to understand exactly what he was looking at, but once he did, he was pissed.

"Keith rented this room to you…uh…" I glanced at the paper. "Mr. Wilson?"

"Daniel, please, or Dan, and yeah. Is that a problem?"

"Yes. It's my room." Hell, it was his house. "Keith doesn't have the right to rent you anything. He's a tenant. I'm the owner."

"Did you give him any money?" Terry asked as he handed the rental agreement back to Dan.

"Damn it." Terry started to head for his dresser to grab some jeans when he realized his dresser was not where it was supposed to be. It was light enough out that he didn't need a light to look around, and when he did, something cold and sick clenched in his gut.

"Where is my stuff?"

"I don't know, man," Dan said. "The place was empty except for the bed when I got here."

Terry fisted his hands, aching to wrap them around Keith's throat. "I'm going to kill him."

That was my bed.

"Uh, this might be a good time to mention I'm a DEA agent."

That surprised Terry enough that he turned to look at the guy. "You're that new DEA agent that moved to town, the one who works with Mike?"

"I thought you were staying in one of Chester's apartments?"

"I was, but it was only temporary until I found another place." When Dan waved his hands around the room, Terry saw the cardboard boxes he hadn't noticed before.

He thrust a hand through his hair. "This is so fucked up."

"I can have my stuff packed and out of here in a couple of hours."

"No, don't do that." Geez, this whole situation was fucked. Terry couldn't kick Dan out into the cold. "You rented this place on good faith. I'm not going to kick you out because my bonehead tenant decided to cash in on your ignorance."

Dan raised an eyebrow. "Want me to shoot him?"

Terry chuckled. "Let's get your rent money from him first. If he doesn't fork it over, then you can shoot him." Terry tried not to look directly at the beautiful naked man as he waved a hand toward him. It wasn't easy. "Why don't you get dressed and we'll go track Keith down."

"I must be losing my touch." Dan chuckled as he turned to grab his jeans. "Beautiful naked man in my bed and he tells me to put my clothes back on."

"Uh…" Terry didn't really have a good response for that.

He turned and went into the bathroom where he remembered undressing the night before. It made his skin crawl to put his dirty, bloody uniform back on, but what other choice did he have? He had no idea where his stuff was.

By the time he got back to the bedroom, Dan was dressed.

Posted by Stormy Glenn at 6:10 PM No comments:

THE RIGHTS OF ALL

I was raised by free loving liberal hippies. There's just no other way to put it. I lived in a commune as a child and remember my parents growing pot, living in a bus, being homeschooled, and living off the land on a farm in the middle of nowhere. I married into a conservative, religious military family. My husband's family served, my husband served, and now my son is serving in the military.


In a lot of ways, these two are as far apart as they could get. And in a lot of ways, they are very similar. The love for family was strong in both. The belief in ideals was strong in both. Over the years, I think I have learned from both about their views of the world. Now, here is my problem, and it has nothing to do with either family, but the important things I've learned.
YOU are no more or now less than anyone else. All of the money and prestige in the world means nothing if you believe you are better than anyone else. All of the problems you have don't mean others don't have problems. A man who makes a million dollars can have problems just like a man who has nothing. They may not be the same problems, but that does not mean they don't have them.
A Christian has the same right to practice his faith as a Muslim does. You don't want to be Muslim? Don't go to their church. You don't want to be Christian, don't go to their church. If you believe prayer should be allowed in church, then pray, but don't force others to do the same if they don't want to. On the other side of that is that if you demand prayer in school, then you have to allow all religions have that right, even the religions you don't agree with. Your religion is important to you. Their religion is important to them.
If Tom wants the right to marry Jane, then John can marry Jane. That's his right. But if John wants to marry Harry, that his also his right. You're not marrying Harry. John is. You're not sleeping with him. John is. Unless you plan on standing at the end of their bed every night to watch them have sex, then why do you care? The "I don't want to see that shit" is crap. Cause's guess what, they don't want you to see it either. Surprise!
You have the right to believe how you want, but you must give the same rights to everyone else.
I can't stand classical music. Hate it. That doesn't mean I believe it should be outlawed, but you won't find me tuning into it on the radio. I HAVE THAT RIGHT.
I don't like watching reality TV. Guess what? I don't. I change the channel. I HAVE THAT RIGHT.
I read MM romance because I like it. I also write it because I want to share what I love with others. I HAVE THAT RIGHT (for now).
I fell in love with a big burly bear of a man and I married him. I HAVE THAT RIGHT.
What I listen to on the radio, what I watch on TV, even who I marry and sleep with is my right as a human. I REFUSE to deny that right to others. What I do in the comfort of my own home or even in my bedroom is no one's business except mine. What you do in your bedroom is no one's business except yours.
You CANNOT demand the right to be who you are without allowing others to be who they are.
You CANNOT demand to be able to practice whatever religion you want without allowing others to practice their religion.
You CANNOT demand the right to love whoever you want without allowing others to love who they want.
You CANNOT demand civil rights without allowing others the same civil rights.
You CANNOT demand to be treated with compassion if you do not have the same compassion for others.
You CANNOT demand the right to make decisions about your own body without giving others the same right to decide.
From my liberal free loving hippie family, I learned that everyone should have the same rights. From my conservative religious military family, I learned that we all must fight to ensure everyone has those rights.
If you want to be considered human, then you CANNOT deny others the right to be human.
And guess what, if you don't like what I have to say, that is YOUR RIGHT.
Posted by Stormy Glenn at 7:33 PM 2 comments: