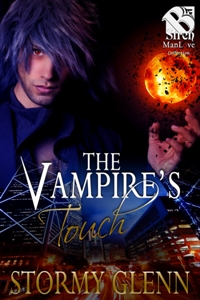 THE VAMPIRE'S TOUCH
Vampire Chronicles 3
coming January 2018
All Charlie O'Bannon wanted for the new year was to get laid. Attending the company New Year's Eve party seems like the perfect place to find someone, but when the clock strikes midnight and he grabs the closet person to him and plants a big kiss on him, he's not prepared for the firestorm that ignites.
Marcus Aguilera is the leader of his vampire tribe. He has always known he would have a vampire as his mate. It was tradition, and he was nothing if not traditional. When a gorgeous man with sultry eyes plants a kiss on his lips at the stroke of midnight, Marcus is stunned that he has finally found his rajaaka. He's devastated when he realizes his mate is human, and leaves him after a night of passion.
But the fates will not be denied. When Charlie's path crosses with Marcus's again, the two men have to decide if they will accept the gift fate has given them or if they will fight what was meant to be. The world around them is changing. There are those who will fight beside them and those that will do everything to destroy them. Only by holding on to each other do they have a chance of surviving.
http://www.stormyglenn.com/thevampirestouch.htm

STORY EXCERPT
"Five… four… three…"
Charlie O'Bannon laughed as someone on a loud speaker counted down the seconds to midnight. He never knew a New Year's Eve party could be so much fun.
"Two… one…"
The spirit of celebration, excitement, and maybe just a little too much hot spiced rum, made Charlie feel bold and inhibited. The moment someone shouted "Happy New Year", Charlie swung around and grabbed the closest person to him and smacked their lips together.
When he felt strong hands grab his hips and pull him close to a wonderfully hard body. A rough tongue brushed against his. Charlie leaned into the kiss, all but melting against whoever held him.
Charlie had purposely stood under the mistletoe just for this reason. He had one New Year's resolution this year and he planned to get it one way or another. He wanted to get laid before the end of the year. He was going to start the new year with a new outlook on life. He was going to start the year without being a virgin.
The lips pressed against his were hard and searching, demanding, and Charlie loved every moment of it. The low growl that rumbled through the chest pressed against his sent tingles of desire shooting through every nerve ending in Charlie's body.
He moaned and pushed closer, wanting to feel every contour of the hard body holding him. Charlie couldn't remember the last time someone had kissed him with such passion...maybe never.
The mouth that hungrily covered his made him feel something all right, mostly the hard cock pressed against his abdomen. Charlie was thrilled, but only because it was a man holding him. At the beginning of the night when he'd devised his plan, Charlie hadn't been particular. He would have taken a man or a woman.
He was much happier with a man, though.
And the one holding him, kissing him with a cruel ravishment, was perfect as far as Charlie was concerned. There was such passion in the kiss, such hunger. Charlie was shocked at his own eager response.
The lips kissing him left his mouth to nibble a path to his earlobe. Charlie moaned, arched his head back, baring his neck. He felt small pricks of pleasure and pain as the man's teeth raked across his tender throat. The lips moving over his skin were still warm and moist from the kiss.
Charlie's heart began to hammer in his chest. His skin prickled at the man's touch, little shocks of electricity shooting through his body.
"You will be mine, kisa."
Charlie shuddered, the deep timber tone of the man's voice whispered in his ear making his knees quake. The man didn't question, he didn't ask. He demanded, as if he knew Charlie was helpless to deny any want he had.
Charlie nodded. A hot ache grew in his throat when he felt the man's teeth graze his skin once again. Damn, he couldn't remember ever feeling anything so erotic. He couldn't ever remember wanted to give in so much either. The overwhelming ache pitting in his stomach was battling with his need to feel the man's teeth on his throat again, and that was just weird.
"So beautiful, my little pet."
Charlie's head snapped back. Pet? Drop dead gorgeous or not, he was no man's pet. "Hey, man, the kiss was great and all, but I can't—I don't even know your name."
"I am Marcus." The man's large hand encircled Charlie's throat, his thumb rubbing over the rapidly beating pulse. "But you can call me master."
Charlie frowned. Master? He started to argue until Marcus smiled and the light from the chandelier above flashed on his perfectly white teeth...fangs.
Oh shit.
"Uh, I don't think this is—"
"Do not think, kisa. Obey."
"Uh…"
Before Charlie could say more, Marcus's lips claimed his. Charlie tried to inhale, to protest, but there didn't seem to be any air left in his lungs. Marcus had sucked it all out with one simple touch of his lips.
Marcus took his mouth with a savage intensity. Their tongues brushed together, each of them fighting for dominance. Charlie finally groaned and leaned into the man's body, giving up control and letting Marcus lead.
"I have a room on the fifth floor," Charlie whispered, hoping he didn't sound too forward.
"Lead on, kisa."
Charlie started for the elevator. Marcus walked so closely behind him, he could feel the man's body heat. Charlie fumbled with the lock when they reached the hotel room he had rented for the night. The tongue licking along his neck was driving every thought out of his head except finding the closest flat surface.
Large strong hands squeezed his ass sending a shock of arousal spiraling through Charlie. "Open door, kisa."
Charlie shivered at the strength of Marcus's words and concentrated on opening the door to his hotel room. He was quickly pushed into the room. The door slammed closed before he could even turn around.
Strong arms wrapped around him from behind. Hot breath blew across the side of his face. Large hands started quickly stripping his clothes away. Charlie didn't know what to do. He just wanted to lean back into the hard body behind him and let the larger man take control and continue to touch him.
When Marcus's hand wrapped around his naked cock, Charlie's thoughts fragmented and he couldn't think of anything else except the heat filling his body at each little touch.
Charlie groaned and tilted his head back as Marcus nibbled on his throat. It felt so damn good. Charlie wasn't sure he'd ever felt so aroused in his entire life. His skin burned, ached for the feel of Marcus's hands.
"Marcus, I need—"
"I know what you need, kisa."
Posted by Stormy Glenn at 11:10 PM No comments: