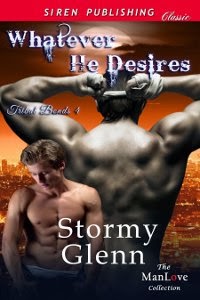 WHATEVER HE DESIRES
Tribal Bonds 4

Drew Hamilton didn’t know why his lover suddenly left him. He just knew that he left. And Drew’s heart had been slowly dying ever since. When he attends a party with his roommate, he never expects to find his ex-lover, or discover the world Garret had been hiding from him from the moment they met.

Garret LaGaffe never wanted to leave Drew but he felt he had no other choice when he was ordered home by his Electus. Drew is human and bringing him back to a vampire tribe could endanger Drew more than Garret was willing to allow. Giving Drew up was a better choice…or so Garret believed until Drew showed up at a party hosted by his tribe.

Misunderstandings and hard decisions add to an already dangerous situation as Garret tries to find a way to have Drew in his life without putting the man in danger. When all of his effort results in the very thing he was working so hard to avoid, can Garret put aside his fear long enough to rescue his anamchara or will he lose Drew to his fears?


http://www.stormyglenn.com/WhateverHeDesires.htm
Posted by Stormy Glenn at 4:01 PM No comments:

My Outlaw (formally part of the Forbidden Love Anthology) is now available as a free read on my website. http://www.stormyglenn.com/freereads.htm

Posted by Stormy Glenn at 11:58 PM No comments: 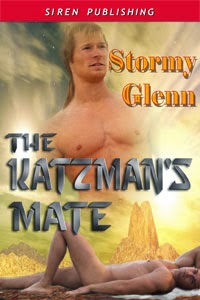 Thirty years after his father, the High Ruler of Katzman, was murdered, Commander Chellak Rai has finally returned to reclaim his birthright. What he finds is more than he expected or could ever have hoped for.
Demyan is a bruter, one of the rare and exotic people of the planet Elquone. He is also a slave. And according to his contract, if he does not have a master, he must be returned to the cruel hands of Vortigern Vedek, the man that killed Chellak's father and stole his throne.
For Chellak, it is a double-edged sword. He knows the moment he meets Demyan that the sexy little man is his destined mate, but the laws of his planet state that he can not own a slave. To keep Demyan, he must defy his own laws and beliefs. But keeping Demyan is not as easy as winning his heart.

http://www.bookstrand.com/the-katzmans-mate
Posted by Stormy Glenn at 3:03 PM No comments: 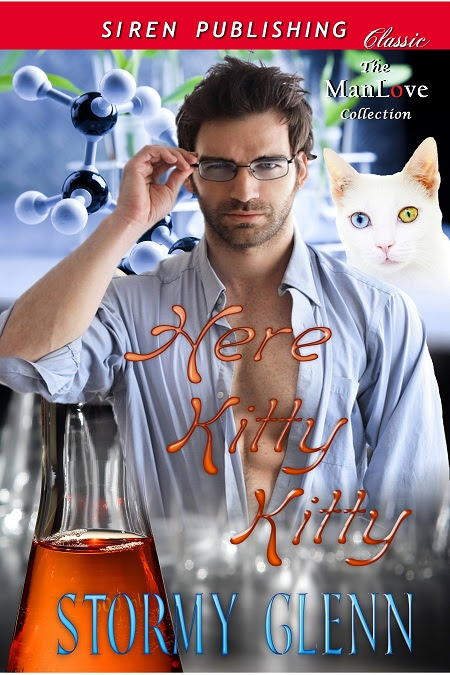 Brandon Erikson knows he doesn't have much chance of finding love. There aren't a lot of opportunities for a man with a little extra padding around the waist and hectic work hours to find the man of his dreams. That is, until he slips and falls at the jazz festival and discovers that the way to a man's heart is through sweet treats.

Dr. Nicolas Syranno is tired of dating men who order salad when he takes them out. He wants someone who takes pleasure in life the way he does, someone who isn't toothpick thin, and someone who understands his crazy work hours as an emergency room doctor.

When Nicolas sees a sexy little blond slip at the jazz festival, has he found the love he has been searching for?

Retro Release Special Discount: This title is offered at a 33% discount. Offer ends midnight CST, December 18th.
Posted by Stormy Glenn at 2:25 AM No comments: 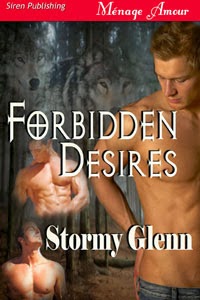 Available now in eBook and Print!

Ryland has loved Gregory for six years, ever since Gregory rescued him from the brink of death. He has also known since then that Gregory is his mate. He's been old enough for a couple of years now, he just can't understand why Gregory won't claim him.

Gregory knew the moment he saw Ryland six years ago that they were mates. Ryland just wasn't old enough to be claimed. So Gregory bided his time, waiting for Ryland to grow up. But as his desire for Ryland builds, he wonders how much longer he can wait.

Gregory finally claims Ryland, only to learn that by doing so, he has endangered Ryland. Ryland is a tri-omega and needs two mates to keep him grounded and safe. But he hasn't met his other mate yet, which could be a problem. It could mean Ryland's life if they don't find him.

Forbidden Desires is offered at a 20% discount. Offer ends midnight CST, December 14th.
Posted by Stormy Glenn at 2:18 AM No comments:

Rory dances because he has to. The visions he suffers from weigh down his soul, and dancing takes him away from all of that. But when he meets Hercules, he finds another reason to dance.

Hercules is an elite enforcer, trained from a very early age to be the best of the best. As large and as strong as he is, he’s very good at what he does…until the day he finds a man that comes between him and his duty.

Pulled into a conflict that started long before they even met, Hercules and Rory need to discover a way to balance their duty to their pack and their desire for each other. If they don’t, they could lose not only the people they care for but the chance to be mates.
http://www.bookstrand.com/never-say-never
Posted by Stormy Glenn at 1:33 AM No comments:


http://www.authorvicktoralexander.com/2013/11/birthday-extravaganza-day-1-jc-wallace.html?m=1
Posted by Stormy Glenn at 12:24 PM No comments:

Aberdeen Pack is being talked about at Siren-Bookstrand's Series Showcase. Drop by and see why Rory dances and and where Iben came from as well as the answer to other questions about the Aberdeen Pack.
https://www.facebook.com/siren.bookstrand
Posted by Stormy Glenn at 12:18 PM No comments:

Everyone has secret desires, especially werewolf Leyland Summers. He dreams of two sexy mates to bring all of his fantasies to life. When he encounters a sexy cowboy who wants to take him for a wild ride, what does he say?
Hell yes!

Coming to ranch country for a picture shoot, Leyland was shocked to find not one, but two mates. Being a tri-omega, he had always known that he would have two mates. He just never expected to find them in the same place. Or to find out that they had been lovers for years.

Having two mates is no big deal for Leyland. He grew up with two fathers. But having two mates that were already in love is something all together different. How is he supposed to share Lucas with Jake...or Jake with Lucas? And where does that leave him?

See a video of Secret Desires