This still makes me laugh, and I wrote it! 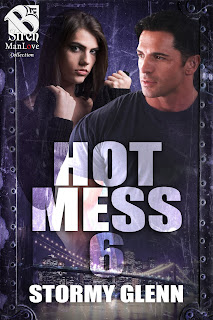 "You still killed a DEA agent."


"You have to answer for that, Mr. Delvecchio."


"Thirteen cars, caro," Sal added. "You forgot the one you drove through the front of the art gallery."


I shot Sal a quick smile before glaring at the DEA dick again. "I've crashed thirteen cars and been crushed by an elephant. My husband is commander of one of the most elite SWAT units in the city. My uncle is the police commissioner. My parents are Lancaster and Cynthia Harris. My best friend is the son of a mobster. My husband's best friend is an FBI agent. I have a blood bond with the head of the Irish mob. I have twin baby girls who went through teething at the same time."


I crossed my arms as I took a step closer to the DEA agent. I smirked when he took a quick step back. "Do you seriously think you scare me?" 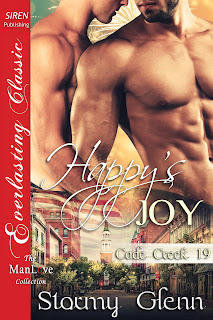 
Cade Creek 19
coming September 20th
Happy and Marc have been together for a couple of years and things are going good for them. Once they bring a puppy into the family, Happy starts to wonder if they need to expand their family. He's positive Marc would make an excellent father, even if he's a little unsure if he would himself.
Deputy Marc Walker had no idea when he rescued Joy that she would come to mean so much to him and Happy. She was the little girl he had always dreamed about, and she was in need of his protection and the love of life only Happy could provide.
When someone comes for Joy, Marc has to decide if giving Joy up is the best thing for her or if it will destroy the sweet little girl he has come to adore. He'll need to call in his friends and co-workers to help keep her safe while they figure out who is after her.
http://www.stormyglenn.com/cadecreek.htm


STORY EXCERPT
Happy was going to bounce right out of his boots. He was...well...happy. Marc had the rest of the day off and they were spending it together, and they were attending Happy's first fireworks show, and he'd made a double batch of cookies.
Could the day get any better?
"Okay, Happy," Marc said as he walked into the house, "everything is loaded in the truck. Are you ready to go?"
Happy nodded enthusiastically. "Mama said she would meet us there. She has something she needs to do first."
"How is she going to get there?" Marc asked. "The fireworks show is at the fairgrounds."
"Oh...um..." Happy's brow puckered as he glanced toward the backdoor. The stairs that led to his mother's one bedroom apartment over the garage was just outside. "I don't know."
Maybe he should go ask?
"Well, run up and ask her. I'll wait in the truck."
Happy grinned before taking off out the backdoor. He hurried up the stairs and started to reach for the doorknob when he remembered what Marc had said about barging in unannounced. His mother deserved her privacy.
Happy didn't totally understand it. Why would she need her privacy, especially from him? She was his mother. Whatever the reason, Happy loved his mother and would do anything to make her happy.
He raised his hand and knocked. A moment later, the door opened. "Hi, Mama."
Anna O'Brian smiled. "Happy."
"You sure look pretty, Mama." She wore a light layering of makeup that seemed to make her green eyes stand out and gave her a youthful look he'd never seen on her face before. Her light brown hair was pulled back from her face and secured on her head in an artful bun.
"How are you getting to the fireworks show?" he asked. "Do you need me and Marc to come get you? We can. It would be no problem."
Anna smiled as she patted Happy's arm. "It's okay, son. I have a ride. I'll meet you there."
Happy cocked his head to one side as something that might have been confusion filled him. "You have a ride?" He didn't understand the flush that filled his mother's cheeks, but it sure looked pretty on her. "With who?"
"You go on to the fairgrounds, Happy. I'll see you there."
Happy's jaw dropped when his mother shut the door.
She shut the door!
In a daze, Happy walked back down the stairs and out to the truck. He didn't understand any of this. It had been weird enough when his mother got her hair cut then started wearing makeup. She'd even gone on a shopping trip and bought a bunch of new clothes. Now she was being weird?
What was going on?
Happy climbed into the truck and shut the door. When the truck didn't start moving, he turned to look at Marc. "We're going to be late."
"They won't start setting off the good fireworks until it gets dark out," Marc explained. "Where's your mom?"
Happy frowned as he glanced back toward the stairs that led to his mother's apartment. "Mama has a ride."
"With who?" Marc asked.
"I don't know." And he didn't like that one darn bit. "She said she'd meet us there."
"Maybe she has a date."
Happy gasped as he snapped around to stare at Marc.
"Happy, your mother is still a young, vibrant woman. She never got the chance to date because of your grandparents. Now that they are gone and you're all grown, this is her chance. You have to give it to her."
"Yeah, but..."
Marc's hand curved around the nape of Happy's neck. "But what, baby?"
"But she's my mom."
"And she still will be, Happy. Nothing will change that. Ever."
Happy's heart clenched. "Will she still love me?"
Marc's eyes rounded. "Oh, baby, of course she will. Your mom will love you until her dying day, and probably beyond. Even if she meets someone and falls in love, she will still love you."
"Are you sure?" Happy didn't think he could stand it if his mother stopped loving him. For most of his life, she was all he had.
"Did you stop loving your mother when you fell in love with me?"
Happy's head snapped back. "Of course not. She's my mom. I will always...Oh." Happy grinned when he suddenly understood what Marc was trying to tell him.
"See?"
Happy nodded. Not all of his fear was gone, though. "What if she falls in love with someone who hurts her?" She'd faced enough hurt to last a lifetime.
"Well, we can't control who she falls for. That's between her and whoever that person is, but we can help her if she needs us." The hand around the back of Happy's neck moved to the side of his face. "And I promise, if someone hurts your mother, they'll have to deal with me."
Tears welled up in Happy's eyes at Marc's fierce words. "Yeah?"
Marc smiled. "Anything for you, Happy."
Posted by Stormy Glenn at 6:11 AM No comments: 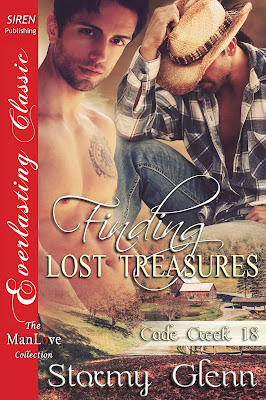 Cade Creek 18
coming August 30, 2018
Available for pre-order!
All Hector Cruz wanted was a place to call his own, but buying a rundown farm came with more problems than he'd been expecting. Between the needed repairs, the problems at work, and the man hiding out in his basement, he was starting to wonder if finding a place to call home was worth the headache.
Wilson Jacks was hiding. He'd done some really horrible things and now he was paying the price for his crimes. Being alone in the world made him ache for all the things he couldn't have. He had no friends, no home, no one to call his own, but that was a punishment in itself, one he felt he richly deserved.
When his world collides with the one man who doesn't expect perfection, learning to accept that he might not be a monster isn't as hard as accepting the fact that Hector is attracted to him. The fragile peace Will finds in Hector's arms begins to shatter when the chaos he's been avoiding comes knocking on the door.