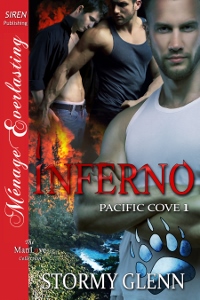 INFERNO
Pacific Cove 1
Coming August 20th
Danny O’Shay grew up knowing he never really fit in. His family avoids him. He falls so much that the staff at the local hospital knows him by first name. And he can’t get a date to save his life.
Enter handsome fire fighters, Ben and Abe Lake, two men that bring every fantasy Danny ever had to life. Except Ben and Abe seemed to have some business deal with Danny’s father that involves a ton of money and the assumption that Danny has a clue.
He doesn’t.
When Ben and Abe start talking about fated mates and shifters and a family legacy that goes back decades, Danny is pretty sure they belong in an insane asylum. But as he gets to know the handsome twins, he begins to wonder if being crazy is that bad. Being alone again seems worse.
After someone starts trying to take Danny out of the picture permanently, he has to trust that Ben and Abe are trustworthy and not in on the plot to kill him, because they might be the only thing to keep his life from going up in flames.
http://www.stormyglenn.com/Inferno.htm

ADULT EXCERPT
“I can smell your excitement, love.”
Danny’s eyebrows rose. “You can smell me?”
“It’s delicious, like the warmest honey with just a hint of cinnamon.” Abe licked his lips, the gesture so sensual, Danny felt his cock jerk. “I could eat you up.”
“Okay,” Danny groaned.
“Here,” Ben said from the front seat, “you’re going to need this.”
Danny caught just a glimpse of a small black bag before it disappeared behind his back. “What is that?”
Abe grinned. “It’s a surprise.”
Danny was dying of curiosity but the gleam in Abe’s eyes kept him rooted where he was. The man’s excitement as he messed with whatever was in that bag might rival his own.
“Straddle my thighs, Danny, and spread your legs as far as they will go.”
Trusting Abe to keep him safe, Danny did as the man requested.
“Now put your hands on my shoulders and use them to lift yourself up.”
Again, Danny did as Abe requested.
“Now, hold on, babe.”
Confusion collided with curiosity. Why would he need to hold on? Danny opened his mouth to ask that very question when it was answered in a way that made a cry of ecstasy come out of his mouth instead.
Something slim and cylindrical and vibrating was being slowly pushed into his ass. Whatever it was, it was no larger than the width of one of Abe’s fingers. And the vibrations were low enough that Danny could still breathe, but just barely.
Abe moved it in and out of his ass slowly, not moving any faster until Danny pushed back against it. “Do you like that, Danny?”
“Yeah,” Danny panted. He fucking loved it. “Wha-What is that?”
Abe grinned again but started to move the object in and out of Danny’s ass a little faster.. “Secret.”
Danny’s eyes slid closed as the vibrations picked up. He could feel his balls pulsing, throbbing. He moved, thrusting his ass down toward the vibrating object, impaling himself, driving it deeper into his ass, faster, harder.
“That’s it, baby,” Abe said. “Fuck yourself.”
Danny screamed when the vibrations increased to an all time high. The tip of his cock buzzed. His balls drew up close to his body and then a fiery sensation erupted inside of his body, sending shot after shot of cum up between Danny and Abe. Danny’s body once again collapsed against Abe, a happy little buzz still zipping through his body.
“Did you like that, baby?” Abe asked as he carefully withdrew the object from Danny’s ass.
“Hmmm.” Danny was non verbal at this point.
“All nice and relaxed?”
Danny grinned. “Uh uh.”
“Good.”
Danny didn’t know why that response sounded so evil until he felt something bigger than the last object push into his ass. It wasn’t so big that it hurt but there was a definite burn. By the time Abe stopped moving, Danny’s entire ass was impaled on the rubbery device.
“Ready, love?”
Danny’s eyes widened. “Ready?”
Ready for what?
Ten seconds.
After Abe hit whatever evil switch he had and the vibrations started and the object in his ass began to move up and down, Danny lasted a whole ten seconds before he was screaming his way through another orgasm.
By the time the truck pulled to a stop and Danny was lifted out of the back of the cab, he could barely lift his head. He had climaxed through four—no, five—five different vibrating dildos, each one larger, thicker, longer, and more powerful than the last one.
Danny currently had an incredibly large butt plug lodged in his ass, his very stretched out ass. That last dildo had been bigger than anything Danny had ever taken, including Ben or Abe. Danny was now fully aware of how they planned on him being able to take both of them.
Torture. Pure, mind numbing, pleasure filled torture.
He was a fan.

Posted by Stormy Glenn at 3:09 PM No comments:

RELEASE DAY: To Take A King 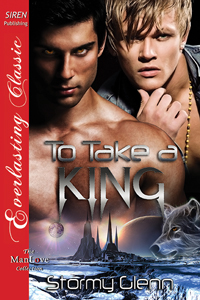 TO TAKE A KING


Venusian Trilogy 1
AVAILABLE NOW!
Elves are from Venus, wolf shifters from Mars. Vampires come from Saturn, humans live on Earth... and one man is king of them all...he just doesn't know it yet.
Nicolas Callon had no idea that his life was going to change the day he turned twenty five. He had simply been hoping to spend a little time with his best friend and secret crush Cooper Walsh. But nothing turns out like he had hoped. From interfering ex-girlfriends to aliens from outer-space, Nicky’s day just goes to hell.
The one bright spot is Cooper, and the passionate interlude they share mere moments before Nicky’s life turns upside down. As he whisked away to parts unknown, it might be all Nicky has to keep himself sane because being told he’s king of the galaxy pales in comparison to watching the man he loves get shot before his very eyes.
If Nicky can find a way back to earth, he might have a chance of making his birthday wish come true. If not, then everything he has gained as king will be meaningless.
http://www.bookstrand.com/to-take-a-king
Posted by Stormy Glenn at 12:08 AM No comments: