AVAILABLE FOR PRE-ORDER: The vampire's Touch 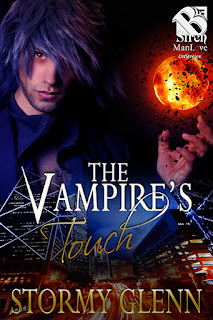 THE VAMPIRE'S TOUCH
Vampire Chronicles 3
PRE-ORDER TODAY!
AVAILABLE: Thursday, January 18th
[Erotic Alternative Paranormal Romance, vampires, M/M, HEA]
All Charlie O'Bannon wanted for the new year was to get laid. Attending the company New Year's Eve party seems like the perfect place to find someone, but when the clock strikes midnight and he grabs the closet person to him and plants a big kiss on him, he's not prepared for the firestorm that ignites.
Marcus Aguilera is the leader of his vampire tribe. He has always known he would have a vampire as his mate. It was tradition, and he was nothing if not traditional. When a gorgeous man with sultry eyes plants a kiss on his lips at the stroke of midnight, Marcus is stunned that he has finally found his rajaaka. He's devastated when he realizes his mate is human and leaves him after a night of passion. But the fates will not be denied.
When Charlie's path crosses with Marcus's again, the two men have to decide if they will accept the gift fate has given them or if they will fight what was meant to be. The world around them is changing. There are those who will fight beside them and those that will do everything to destroy them. Only by holding on to each other do they have a chance of surviving.
http://www.bookstrand.com/book/the-vampires-touch
Posted by Stormy Glenn at 2:49 PM No comments: 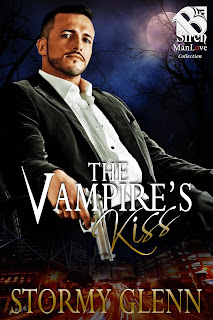 THE VAMPIRE'S KISS
Vampire Chronicles 2
available now!
Attending the company Christmas party should have been a joyous occasion, but for Etienne LeRuelle, it was just one more time when men vied for his attention because he was pretty when they had no intention of keeping him. When the head of Vaile Industries security makes his intentions known, Etienne has to decide whether the man is serious or not, because he isn't sure he could survive the heartache if Louis just wants a one-night stand.
Louis Redgrave knew Etienne was his rajaaka the moment he laid eyes on the beautiful man. Fighting off a room full of drunken vampire to get to Etienne is child's play compared to trying to convince the man he wants to keep him forever.
If they can survive the misunderstandings between them and the never ending attacks by rogue vampires, they just might have a chance at a life they both only dreamed of.
http://www.bookstrand.com/book/the-vampires-kiss
Posted by Stormy Glenn at 2:47 PM No comments: