RULES
1.Must be a member of both Stormy and Joyee's yahoo group.

2.Must answer ALL 14 questions from both yahoo groups correctly. The answers can be found on Stormy and Joyee's websites:

3.Must EMAIL all answers to joyeeflynn@hotmail.com

4.Email must have "Mating Game Contest" in the subject line.

5.Winner will be chosen June 1st, 2010. Winner will receive book the morning of June 2nd, release day and be announced on both yahoo groups.

Stormy's 7 questions cane be found on her yahoo group at: http://groups.yahoo.com/group/stormyglenn/

Joyee's 7 Questions can be found on her yahoo group at: http://groups.yahoo.com/group/joyeeflynn/

All 14 questions must be answered in order for your entry to qualify.

Posted by Stormy Glenn at 3:03 AM No comments:

Rojan Ja'Dar is a rogue, a pirate that buys and sells cargo for a living. He skirts the edge of the law and is his own man, answering to no one. Arriving on particular planet, he goes to drop of cargo and discovers a human being sold at an auction house. Intrigued, Rojan breaks all his rules and buys the human as his pet. It isn't until after he purchases the human that Rojan discovers he just bought his mate.

Claiming Tyion is not as easy as buying him. Tyion fights his situation, not understanding the danger he is in as a human, a highly prized and sought after pet in Rojan's world. Rojan has to convince Tyion that being his mate is not as bad as being a pet, even if they have to pretend to the rest of the world that Tyion is just a possession. That is hard to do when someone is after Tyion, someone not of his world.

http://www.stormyglenn.com/slaveauction.htm
Posted by Stormy Glenn at 2:59 AM No comments:

The Vampire's Assistant by Stormy Glenn

Applying for the personal assistant position to the reclusive Nikolas Vaile, CEO of Vaile Industries, one of the largest pharmaceutical and research companies in the world, seemed a little too high seeking, but what did Jon have to lose?

Could there be a good side to being sucked onto a future realm? Leo Marshal thinks so, he found his dream lover, Ashrin of Ecatnie Pride. The only problem is; Leo is afraid Ashrin will love him . . . to death.

Twenty-six years of dedicated duty as one of Baltimore's finest should earn a man some reward. One autumn night in a dark cemetery, Officer Rick Baker is forced to reflect on his lonely, closeted life when he meets a strange young man named Diego under peculiar circumstances.

Diego is unlike anyone Rick has ever met, and Rick has to face his own prejudices toward Diego's kind. Couple Rick's deeply rooted need for love and companionship with Diego's remarkable gifts, and even the threat of hell might be too tempting to resist. The police motto "To Serve and Protect" takes on new meaning in "Let Them Try" by authors Reno MacLeod and Jaye Valentine.

Posted by Stormy Glenn at 2:57 AM No comments:

BUY YOUR COPY TODAY
About the book
Mark Antonious Richfield has become a name synonymous with both beauty and chaos. Though Mark has accomplished much in his life, despite a rocky start from an abusive childhood and living in denial about his sexuality, he has come only so far. Mark is forever conflicted with his advancing years stealing his beauty away.
Though he perceives himself as shallow and useless, Mark’s circle of lovers know otherwise. Steve Miller, the ex-LAPD cop, and forever guardian angel to Mark, Jack Larsen, Mark’s long-time and closest friend, and Adam Lewis, Jack’s husband, all stand firm to protect Mark from his own demons.
And though Mark’s son Alexander is not a bad boy, he’s a very naughty boy. Mark thought his problems with Alexander were finished when Alex met Angel Loveday’s son, Oliver. But perhaps Mark wishing his nineteen year old son was in a relationship that would last a lifetime was a bit premature.
As Mark’s internal war rages on, he once again learns that age does indeed come before beauty, and his friends are the best weapon he has against his own wounded self-esteem.


An excerpt from the book
Mark tossed on the bed. Sleep? Not likely. What was it about the holidays that brought back nightmarish memories? This was the time for joy and peace, right?
Ha. Hardly. Never for me.
The door to his room began to open. Mark expected Steve. When Jack glanced into the dimness, Mark smiled in delight. “Hi, Jackie-blue.”
“Hey, babe. You feel okay? Steve sent me up to check on you.”
“Better now.” Mark reached out to him.
Jack sat on the bed and caressed Mark’s chest. “He said you were tired. Do you want me to let you nap?”
“I can’t sleep.”
“Want to come down? Adam brought some very expensive cognac to crack open.”
“In a minute. Come here.” Mark coaxed Jack to lie beside him, face to face.
“Talk to me.” Jack caressed Mark’s cheek. “I know the holidays are always hard on you.”
“It’s amazing how well you know me.”
“I know you for twenty years and we lived together for most of that time.” Jack kissed his neck and earlobe.
Mark leaned back see into his blue eyes. No one protected him like this man did. He was his personal pit bull, his security guard, his knight in shining armor.
“Which demon is bugging you?” Jack flicked Mark’s long hair behind his shoulder. “Come on.”
Dropping to his back on the bed, Mark stared at the ceiling. “I have no idea why, but I’m thinking about the time I was working at the architecture firm, before I took the job at Parsons and Company.”
“Why? Why are you torturing yourself?”
“I must like it.”
“I told you then we should have taken them to court. You had so much proof of harassment, you would have gotten a huge settlement.”
Mark laughed in a cough. “Bring all that up? Whilst I was dating Ms. Tice? Surely you jest.”
“Then forget it. You can’t go back and change a thing in your past. Stop trying.”
“Give us a hug.”
Jack snaked his arm around Mark and drew him close. On contact Mark sizzled with excitement.
“Damn, I love that cologne. I’d buy it but if I smell you all day, I won’t get any work done I’d be so horny.”
“Jackie, why do I have so many regrets?” Mark rested his chin on Jack’s shoulder.
“I don’t know. You have so much, it really doesn’t make sense. Most people would be thankful in your position.”
“Yes. Thankful.” Mark pressed his lips against Jack’s cheek.
“You have three devoted men in your life, a great son, two fabulous careers…what more does a man need?”
“Indeed. I am greedy.”
“Do you want more than you have?”
“I want peace in my head. It’s the one thing I can’t get and I don’t know why.” Mark leaned back to catch Jack’s eyes again.
“You dwell on shit. Let it go.”
“It seems it would be easy. But it’s impossible for me to do.”
Jack ran his hand over Mark’s crotch. Mark assumed he was checking for a hard-on.
“Steve said you and Adam will be spending the night.”
“We will. I want to get drunk and not worry about the drive home.”
“Is that all?” Mark wriggled into Jack’s palm.
“Not all. Love our four-ways.”
Mark’s cock pulsated against Jack’s fingers.
It made Jack chuckle. “I’ll take that as an agreement.”
A light knock sounded at the door.
Mark looked over Jack’s shoulder to see Steve.
“Yes!” Steve grinned and rushed over. “Starting early?”
“I’m tempted.” Jack squeezed Mark’s cock firmly. “He couldn’t sleep. He was lying here stewing on ghosts of problems past.”
“Sounds like the ultimate Christmas Carol prank. But you’re not Scrooge by any stretch of the imagination.” Steve found Mark’s hand and used it to rub his own groin hungrily.
“Who’s here, love?” Mark asked, getting aroused now that both his alpha dogs were starting to circle.
“Angel, Billy, Oliver, and of course, Mr. Adam Lewis. He sent me up here to find you. We had a wager Jack would be sucking your big cock.”
“How much did you lose?” Jack smiled.
“Fifty bucks.”
“You bet we would be?” Mark blinked.
“Yeah. Because I would be. I will be.” Steve became more assertive with his friction against Mark’s palm. “Fuck. Now I need to come. Jesus, Richfield.”
“I’m just lying here. What did I do?”
“Jack’s stroking your dick.” Steve pointed. “That’s enough.”
Making a move to get off the bed, Jack said, “Okay. We have all night. We can’t hide up here when the party is down there.”
Steve groaned as if he were in pain.
Mark sat up and kissed Steve’s zipper flap. “Poor baby.” He laughed. “Wow. Full woodie. Steven, you’re insatiable.”
Jack swung Steve into his arms and gave his crotch a hot grope. “Nice, Miller. Can’t wait to get at it.”
“Oh, man!” Steve swooned. “You guys are really killing me here.”

www.authorgahauser.com
http://gahausersblog.blogspot.com/
Please help my battle against ebook piracy and join my Facebook fan page for taking down pirate sites
http://www.facebook.com/home.php?#/pages/Close-down-Astalavista-pirate-site/226369672766?ref=mf
www.facebook.com/people/Ga-Hauser/1486624188
Posted by Stormy Glenn at 9:52 AM No comments: 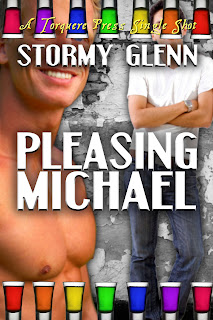 AVAILABLE TODAY
Jackson Davis is a gay man’s wet dream, but he’s tired of finding lovers who only seemed to want him for his looks, not a real relationship. One night at a bar, Jack discovers a man watching him. The man never approaches him, never speaks to him, but when Jack finally confronts the man, he is astounded by the reaction. Thus begins Jack’s obsession with pleasing Michael.

What follows is a story of frustration and confusion for Jack as Michael commands and dictates, rewarding Jack when he’s good and punishing him when he's bad. Jack is worried that letting Michael dominate him makes him less of a man. Can Jack accept the fact that pleasing Michael makes him happy, or will he lose the best thing that ever happened to him?

For excerpts visit my website at www.stormyglenn.com
Posted by Stormy Glenn at 3:03 PM No comments: 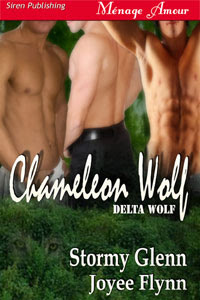 CHAMELEON WOLF
Delta Wolf 1
By
Stormy Glenn & Joyee Flynn
Zac Sheehan is a Delta wolf, the council enforcer, sent out to eliminate those that broke the rules. It’s a lonely existence, leaving him on the fringes of werewolf society. All Zac wants is to find his mate and live in peace.

While on a mission, Zac finds the one thing he’s been looking for all of his life, his mate. Matt is everything Zac ever wanted in a mate, loving, caring, and drop dead gorgeous. Zac couldn’t be happier, or so he thinks. But as another mission looms, Zac discovers that things could be more dangerous than he thought. The wolf he’s been sent to eliminate is his other mate.

BOOK OF THE WEEK

You can also read the wonderful reviews while you're there.
Posted by Stormy Glenn at 3:11 PM No comments: