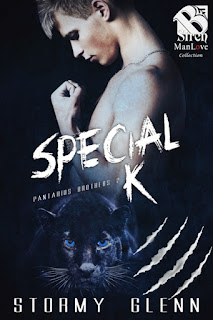 Dominic Pantarius had stood by and watched his best friend and brother find each other and learned what he wanted in life. A mate, that one person meant just for him. One-night hookups no longer held any appeal for him. When a cute veterinarian with soulful brown eyes and a little sass gave him attitude, he was pretty sure he'd found the mate he'd been looking for.
Keeland Fagon was intrigued by Dom the moment the man almost hit him with his motorcycle. Too bad the man had to ruin it by opening his mouth. Keeland was used to bigger men trying to boss him around. he had learned to stand up to them and not let them bully him around. When Dom starts to pursue him, he doesn't know whether to argue with the man or welcome him with open arms.
Introducing Keeland to the world of shifters might send the sexy little human running for the hills, but an accidental bite mates them together for life. Now, Dom has to convince his mate that they belonged together even as outside forces try to rip them apart.
http://www.bookstrand.com/book/special-k
Posted by Stormy Glenn at 10:35 PM 5 comments: