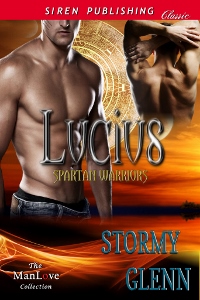 
http://www.stormyglenn.com/Lucius.htm
Lucius is Spartan, a genetically enhanced soldier created for the sole purpose of fighting. But what is he to do when the war is over? Exiled with his unit to an island off the Pacific coastline, Lucius is shocked when he finds more than a deserted island when he meets Ari, a man determined to live by his own rules even at the cost of his own life.
Ari was just a teenager when he was abandoned by his family and exiled because he didn’t meet the new moral code. He does what he needs to do to survive. When he meets Lucius and the other Spartan, he finds that the fierce warriors need even more help than he does.
Emotions have been drummed out of the Spartans, deemed useless to men taught nothing but killing. Teaching them to feel just might be harder than Ari thinks, especially when he needs Lucius to be the killing machine he was born to be in order to save them all when the enemy attacks. But the cost might be the man he is falling in love with.

ADULT EXCERPT
Ari yelped when he was suddenly grabbed around the neck and yanked forward. Hard searching lips pressed against his…and that was it. Ari waited for something more to happen—movement, the slip of a tongue, anything.
He got nothing.
Lucius was frowning just about as deeply as Ari had ever seen when the man leaned back. “I am not sure I fully understand why everyone seems so excited by a kiss, Ari. While I find that my pulse increases and my penis grows harder, this kissing thing does not seem to be a good enough reason to be so excited.”
Ari’s jaw dropped. “That wasn’t a kiss, Lucius. That was just you pressing your lips against mine.”
“A kiss is the act of pressing one's lips against another person’s, is it not?”
“Yeeaahh, sorta. There’s a little more involved than that.” Ari chuckled as he pushed the blankets down and moved to sit on the edge of on the bed. He patted the mattress in front of him. “Come over here and I’ll show you why everyone raves about kissing.”
Well, Ari hoped he could show Lucius what was so exciting about a kiss. He was pretty sure that Lucius was interested in men if he gave the Spartan a hard on. That did not mean he would like kissing. Not every man did. Ari, on the other hand, loved kissing. He dreamed of making out with a lover for hours.
If he had a lover.
Once Lucius had moved into place, Ari when to grab him when he noticed the flak jacket he was wearing and the gun holstered at his hip. While the man was prepared to go into battle, this was not a battle.
It was a kiss.
“Can you take off the flak jacket and gun?” Ari gestured to the nightstand. “You can put them there within easy reach.”
Lucius looked hesitant, his jaw firming as if he was fighting his instincts, but finally, he unbuckled his gun belt and laid it down on the nightstand then pulled his flak jacket off, laying over the top of his gun holster. When he was all done, Lucius settled back down on the bed.
“Now what?”
Ari chuckled just because the situation was so fucking weird. “Close your eyes.”
“Why?”
“Please?” Ari would never admit to Lucius that he was too nervous to have the man watching him while they kissed. Lucius’s dark eyes assessed everything, looking for strengths and weaknesses. For once, he just needed to feel.
Ari’s stomach fluttered when Lucius’s eyes slowly slid closed, and that was a telling moment in itself. Ari knew that there had to be at least some level of trust for the man to close his eyes around him.
Ari held his breath as he cupped Lucius’s chiseled face between his hands and leaned forward, touching his lips to Lucius’s. His tongue stroked across Lucius's lips, caressing his mouth more than kissing it.
Groaning, Lucius opened to him, and Ari swept his tongue inside, exploring, conquering. Tasting the warrior that he had wanted since the moment he saw the strong man standing before him with a knife in his hand.
Ari started when he was suddenly crushed against Lucius’s chest, the man’s large hands fisting him his hair. Lucius pressed his mouth to Ari’s, claiming his mouth with a savage intensity that seared Ari to his toes. Ari returned Lucius's kiss with reckless abandon, wanting more, wanting Lucius.
Now, this was a kiss.
When the full weight of Lucius’s muscular body pressed into him, Ari fell back against the pillows. A deep growl rumbled through Lucius’s chest as he crawled up and settled over the top of Ari, the width of his hips spreading Ari’s thighs until they almost hurt.
The pain was worth it to feel the monstrosity of a cock Lucius was sporting press against him. Ari’s breathing sped up as he hitched his hips and wrapped his legs around Lucius’s waist, bringing their two cocks together.
Ari bemoaned the fact that fabric separated them when he so desperately wanted to feel Lucius’s naked cock against his own. He reached down, wiggling his hand until he could get it between them, searching for the buttons of Lucius’s pants.
The moan that fell from his lips came partly from the victory he felt when he found the buttons and got them undone, and partly from the lips that continued to devour his. Lucius kissed Ari with a hunger that rivaled his own, threatening to consume them both.
Ari slid his hand inside of Lucius’s pants. The very moment his hand wrapped around Lucius’s wide girth, the man’s head snapped up, breaking the kiss. Lucius stared down at Ari for what seemed like a million years, and then tossed his head back as he roared, bucking wildly as hot cum filled Ari’s hand.
Ari just laid there, stunned, his own cock throbbing, aching. After watching Lucius’s display, he was so close to release that a stiff wind would have sent him over the edge. He just needed a little more, a little…
Ari cried out, his entire body going ramrod stiff as Lucius’s lips slammed back down on his, the man capturing his lips in a kiss that showed who dominated who. Lucius’s hand wrapped around Ari’s throat and the underside of his jaw, tilting his head back. The other one moved down Ari’s body, sliding down under him to grab his ass.
He was so damn close.
Ari almost went out of his mind when Lucius’s single hand covered a fair amount of both ass cheeks. He ripped his lips away from Lucius and stared up into Lucius’s unfathomable eyes, the intensity of the man’s gaze making his entire body clench with need. Ari swore he could see flames leaping to life in Lucius’s dark eyes, an invisible web of attraction building between them.
“Lucius.”