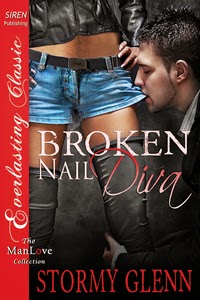 Harper Brooks refuses to be anybody except who he is, and who he is shocks most people. When he meets a gorgeous man at a sidewalk café, he has no problem telling him exactly what he wants—in vivid detail. When the Memphis rejects him, Harper hides his hurt behind flippant words and a flash of indignation, but forgetting the man might prove impossible.


Memphis doesn’t know what to think when he’s propositioned by an imp with dreamy blue eyes and an ass to die for. He doesn’t do relationships—ever—and one night spent in the gorgeous man’s bed isn’t enough. Memphis wants more. He just knows he can’t have it. Nights of passion could lead to the sexy little diva dying at the hands of Memphis’s beast.
When Harper gets kidnapped by a madman, Memphis runs to the rescue, and in doing so reveals his darkest secret. But there is a lot more going on than either of them know, especially when the bond between them creates more than either of them expected.
http://www.bookstrand.com/broken-nail-diva


ADULT EXCERPT
Harper yawned as he turned off the bathroom light and made his way to his bed. He scratched his abdomen, his fingers sliding easily through the small trail of brown hair that went from his bellybutton to his groin. He crawled between the sheets, wiggling around until he found the perfect spot.
Goddess, he loved these sheets. A present from his best friend, they were soft and silky and stayed cool in the summertime, crisp against his hot skin. He closed his eyes as his head sank back into the plush pillows stacked behind him.
Harper didn't know how long he laid there before he huffed and opened his eyes to stare up at the ceiling. It had been like this for three nights now. He couldn't sleep. Every time he closed his eyes, he saw those damn gold colored eyes staring back at him. He couldn't stop thinking about the gorgeous stranger.
It was destroying his life.
Well, it destroyed any chance he had of finding someone to come home with him for the night. Harper had tried. He had gone out clubbing with friends last night and tonight. He had come home alone each night. The thought of anyone touching his skin was almost a physical pain.
It sucked.
Harper slid his hand down under the blankets and wrapped his fingers around his cock. The fact that he was hard came as no surprise to him. He felt like he had been hard for forever. He had jerked off more in the last three days than he had when he discovered gay porn on the internet. It happened in the most inconvenient places, too… work, the grocery store, riding the subway home from work, even when he went out with Truman for dinner.
His dick was actually starting to get mileage burns.
Harper began to wonder if he would continue to have a hard cock for the rest of his life. It was like being on a bad Viagra trip, except he didn't take Viagra. And it only got worse when he closed his eyes and thought of the gorgeous man from the sidewalk café.
He was freaking doomed!
Every time he thought about the handsome stranger, his cock filled and thickened. He just wanted to feel the stranger's hands on him or in his mouth. He wanted to feel the man's cock sink into his ass, and pound him into unconsciousness.
With his eyes still closed, in his mind, he could see the stranger fisting Harper's cock, stroking him to completion. He tightened his own fist around his shaft and began stroking from root to tip. He ran his thumb over the moist head, smearing the pre-come around and squeezing lightly. Harper bit his lip as his pumped his hand to the rhythm his hips were setting.
His thumb slipped over the head of his cock, giving him a natural lube to use as he thrust into his hand. The harder he stroked, the more he fell into his fantasy until he couldn't tell if it was the stranger's hand or his own. As the pressure built, he started moving his hips faster, thrusting into his tight grip.
It didn't take long before his balls were pulling up tight. A web of arousal spun around him as he squeezed his shaft, his thumb caressing over the leaking head. He growled when he felt the tingle shooting up his spine
As his thumb brushed over to tip of his cock once more, Harper's legs trembled and his breath caught in his throat. Feeling himself about to explode, he flipped back the covers and then let his other hand fall down to fondle his balls.
"Come for me," a smoky voice whispered into his mind, clouding all reason and making his fantasy complete.
"Fuck!" Harper screamed as hot ropes of seed shot out of his cock, splattering his chest and under his chin. He panted heavily as he opened his eyes and stared up at the ceiling. He needed to get laid or buy more batteries or something, whatever it took to get his mind off of some guy he had met for five seconds on the side of a street.
A guy who had firmly rejected him.
As he reached for a wet wipe to clean up with, Harper wondered how the stranger would feel if he knew he had become prime masturbation material. Remembering the muscles the man had sported and the friendly pat he had shared with his friend, Harper knew the guy would probably hand him his head if he knew how deep Harper's arousal ran.

It was too bad.
Harper really could have rocked his world.
Posted by Stormy Glenn at 5:46 PM