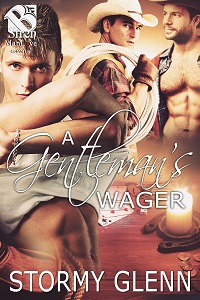 A gentleman's wager never seemed so risky...or so worth it...

Steven Stewart had been invited to a weekend long western theme party along with his brother. There was just one stipulation. Steven had to go dressed as Ms. Stella. Considering he was gay, it was going to be pretty hard to catch a cowboy if everyone thought he was a girl.


Chase Montgomery was obsessed, both with his lover of three years and Steven Stewart, a man he had only seen in a picture. The weekend theme party he was throwing was the perfect time to introduce both to the fantasies in Chase's mind. Now, if he could only get his lover to agree.
Warner James was someone who refused to give up control. While that attitude served him well in the business world, it was hard on his love life. He never dreamed his lover was thinking of brining someone else into their relationship...until he meets Steven. Warner might even be interested in a bit more than just a weekend fling if he can get both men to understand he was the one in control.
http://www.stormyglenn.com/agentleman'swager.htm