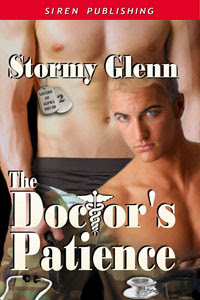 THE DOCTOR'S PATIENCE
Lover's of Alpha Squad 2
Sam is a special ops soldier. He knows how to handle a gun, fight his way out of almost any situation, and is usually prepared for anything…except the feelings he is quickly developing for Dr. Daniel Evans, the squadron doctor.

Doc, however, has had feelings for Sam for quite sometime, but he has no idea what to do about them. For as long as he has known him, Sam has always been straight. When a chance encounter with Sam leads him to believe that Sam might be interested in more than a doctor patient relationship, Doc decided to pursue Sam, only to learn that Sam is married…to a woman!

Heartbroken, Doc ignores Sam's pleas for help when his wife is attacked. But when Sam brings his pregnant bride home and Doc learns that Sam still has feelings for him and it's a marriage of convenience, will Doc forgive Sam?

As they try to explore their new relationship, the danger that brought Sam home in the first place threatens to separate them permanently. With the help of their friends, Sam and Doc try to protect Sam's wife and themselves, hoping for a life together.

STORY EXCERPT
"Hey Doc, you got a minute?"
Doc nearly jumped out of his skin when the object of his thoughts, and many late night fantasies, walked into his office.
"Sure, Sam, what can I do for you?" He asked hoping his voice sounded normal. His heart rate sure wasn't. If he weren't a doctor he would swear he was having a heart attack.
"I cut myself and I was hoping you could take a look at it." Sam held out his hand, which was wrapped in a kitchen towel.
Doc stood up and unwrapped Sam's hand. The cut was small but deep. "Come on, that's gonna need a couple of stitches."
Sam followed Doc into the exam room and sat down on the exam table. He watched Doc gather supplies from several cabinets and place them on a small silver tray. He liked watching the smaller man move around the room. He always seemed so efficient at what he did. Sam had always been impressed by how intelligent Doc was. He was great to talk to and never made Sam feel like he was an idiot, unlike his father who was a prominent Boston businessman.
Sam was a little unnerved by the sensation he felt when Doc held his hand still to further exam his cut. The feel of Doc's fingers on his skin sent a small tingle right to his groin. He had been having these strange sensations for awhile now and didn't know what to do about it. He had never seen Doc date anyone, male or female. Hell, he didn't even know which way Doc went.
He had never been attracted to men. He had never even considered sex with a man. He had always been with women and since sex with women had never been that mind-blowing, he hadn't done it that often, just when he needed to relieve some tension.
But the sensations he got when Doc touched him were different than anything he had ever felt. Just thinking about Doc made him hard as a rock. Which wasn't a good thing considering Doc was leaning right over the tent in his pants. Sam hoped to hell that Doc didn't notice.
Doc cleaned Sam's cut, put in a couple of stitches and then wrapped it. It was all he could do not to lean over and bury his face in Sam's neck. The scent of Sam's skin was intoxicating. Doc had never smelled anything like it in his life, all male, with a soft hint of musk. Doc could smell him all day long.
However, it certainly would not be professional to attack his patient, his very straight patient. Besides, with Sam standing a good six inches taller than his five foot eleven frame, and probably one hundred pounds heavier, Sam could wipe the floor with him.
As kinky as it seemed, the thought of Sam wrestling him down onto the floor made Doc's cock jump up and beg. Doc nearly groaned. He had always been attracted to big tall strong men and Sam had a massive self-confident presence that just screamed to Doc. Not that he considered himself a sub or anything. He always liked to be on equal footing in a relationship. But there was just something about the bigger man that made Doc feel safe and protected.
"So, Doc," Sam began hesitantly, "Do you date?
Doc nearly dropped the wad of gauze he had in his hands at Sam's question. His eyes flew to Sam's before lowering quickly back down to the hand he was working on.
"Yeah," he said, clearly surprised that he had asked. Why in the hell would Sam be interested in whether or not he dated? Unless…
"Why?" He asked, unable to contain a small kernel of hope growing in his heart. "I just wondered. I've never seen you go out before."
Doc held his breath waiting for Sam to continue but after a few moments of silence he finished wrapping Sam's hand and stepped back. "Okay, that should do it. Keep it dry for the next couple of days. I'll take out the stitches next week. And remember to keep it clean."
Sam watched Doc clean up the medical stuff, his movements stiff and awkward. Had he offended the Doc by asking? He hoped not. He liked Doc and thought of him as a friend. And you could never have to many friends.
"Hey, Doc?" Sam said as he stood up from the exam table. "I hope I didn't offend you or anything. I was just curious."
As casually as he could manage, he said, "You didn't. I do date on occasion but lately…"
"Lately?" Sam asked when Doc didn't continue.
Stains of scarlet appeared on Doc's cheeks as he finished speaking. "I've kind of gotten interested in someone lately and don't want to mess it up by dating someone else."
"You're interested in someone?" Sam asked, clearly astonished, his feelings towards Doc becoming confused when he realized that he was upset that Doc might be interested in someone. "Anyone I know?" he asked sharply.
Doc was startled at the hostility in Sam's voice. "Why do you want to know? Why would you care?"
"I don't!"
The force of Sam's seething reply took him off guard. Sam was clearly angry but for the life of him Doc couldn't figure out why. Did Sam think that he was interested in someone he himself wanted?
"Sam…" Doc began.
"I don't care who the hell you fuck." Sam's voice was quiet, yet held an undertone of cold contempt.
Doc stood there in shock at Sam's outburst as he watched him storm from the room, slamming the door behind him. Well, that went well.
Posted by Stormy Glenn at 1:27 PM