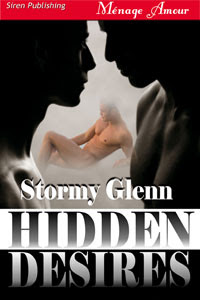 HIDDEN DESIRES
Tri Omega Mates 3
After watching his alpha and beta almost lose their mate, Thomas decides he needs some time alone. Driving across country, he discovers Micah, a human that smells like dark chocolate and summer rain. He knows immediately that Micah is his mate but before he can claim him, he has to get Micah's sexy little butt out of trouble.

They are attacked by a band of bullies. In his bid to protect his mate, Thomas reveals his true nature to the bullies and to Micah. Afterwards, he has to call in reinforcements to help clean up the mess. It comes in the form of Caleb Hunter, alpha of the Hunter Pack and Micah's other mate. But Micah's human. Isn't he?

Story Excerpt
It was Thomas! He had come. Micah felt woozy as all the blood in his body suddenly rushed to his groin area. He hoped the erection tenting his jeans wasn't too apparent as he walked towards the man with the welcoming smile on his face.
From the way Thomas was standing, an arm resting on each side of the doorframe, Micah could see every muscle of his tight rippled abdomen through the shirt stretched across his stomach. Oh, boy!

"Hey, sweetheart, you left this for me?" Thomas asked, brining the pink rose in his hand up to his nose, sniffing in its flowery fragrance. "I'm hoping it means you wanted me to find you." Like not finding him was an option.

Micah nodded his head, not quite sure what to say to him. I want to fuck you until neither of us can walk just didn't seem polite.

Thomas gave him a quizzical look. "Can I come in?"

Micah could feel himself turn a thousand different shades of red as he opened the door and held it open for Thomas to come in. He groaned to himself as Thomas walked by, getting a good look at the tight ass in his faded jeans.

"Nice place you have here," Thomas said as he looked around the living room.

Micah nodded absently, his eyes still devouring the sight of Thomas's ass. He would never have thought it before but he suddenly knew he was an ass man. Thomas's ass was a work of art—tight, rounded, and just begging to be grabbed. It was all Micah could do not to give into the impulse to do just that.

"So," Thomas began as he turned back to face Micah. Micah's eyes quickly darted up to Thomas's to find an arousing smirk on his face. Oh yeah, he was clearly aware that Micah had been checking him out.

Thomas took the few steps between them until their chests were nearly touching, his eyes devouring Micah's flushed face. He reached down and gently caressed the side of Micah's cheek.

Micah closed his eyes and leaned into the soft touch. A distant part of him marveled at how wonderful the simple touch of another human being could feel. The other part of him, the hungry aroused animal in him, wanted to grab Thomas and drag him upstairs by his hair and strip him naked.

"Can I kiss you?" Thomas whispered quietly, the breath from his mouth blowing gently down over Micah's forehead.

Micah opened his arctic blue eyes to gaze up at him, slowly nodding his head. "Oh hell, yes," he whispered, leaning towards him.

Thomas chuckled as he leaned down and placed his lips against Micah's, his tongue brushing softly against his lips, asking silently for permission to come in. Their lips met, clung together until Micah opened his mouth, his tongue sneaking out to caress Thomas's.

"Besides sexy, gorgeous, mate, and lover, what can I call you?" Thomas murmured in between kisses.

"Micah." Sexy? Gorgeous? Mate? Lover? Oh hell, he hoped so. Micah was so turned on just from a simple kiss he wondered how he would react to anything more. It was all he could do not to grab Thomas by his shirt and pull him down to the floor as it was.

"Micah, I like that. It's very sexy. Just kind of rolls off the tongue," Thomas drawled, his voice low and husky.

"I can think of a few other things you can do with your tongue," Micah whispered as he stood on his tiptoes to kiss Thomas again. Hot damn, this man could kiss. Normally, Micah could live on Thomas's kisses alone. But right now, he needed something more.

"Would you—do you want to come upstairs with me?" Micah asked hesitantly, holding his breath as he waited for Thomas to answer. He had never asked anyone to come up to his room before. He didn't know what the etiquette was for asking.

"Lead the way, baby," Thomas said, the grin on his face growing to enormous proportions.
Posted by Stormy Glenn at 1:12 PM