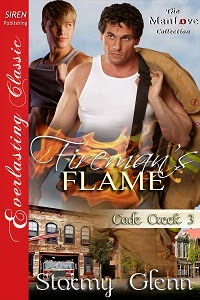 Cade Creek 3
Coming March 5th
After seven years, Chester Bailey has called it quits. His divorce has finalized and he’s packed up his life with plans to move to Cade Creek. But fate has a sense of humor, which Chester discovers when he’s involved in a car accident just as he reaches the small country town. Rescue comes in the form of the sexiest fire chief Chester has ever seen…and maybe a new love interest.
Fire Chief Jack Helmond is used to being called to the scene of accidents. It’s part of the job. When he discovers a frightened young man pinned in his car, the job takes on new meaning. Rescuing Chester becomes personal.
But Chester’s past refuses to give up so easily. His ex won’t let a little thing like a new lover or even divorce papers stop him from claiming what he believes is his. If Jack has any hope of keeping the flames of romance burning between him and Chester, he’ll need more than fellow fire fighters to help him. He might need all of Cade Creek.


STORY EXCERPT
Chester shook his head as the red traffic light he was stopped at turned green. He knew it was going to take a whole hell of a lot more than a desire to start a new life for it to actually happen, and he hoped his friend Yancy could help.
Chester eased the car into traffic once again, heading for the Cade Creek Diner, a place he had been to before and fallen in love with. Granted, it had taken a lot of talking and some fluttering eyelashes to convince the cook to add a few vegetarian dishes to the menu but now that he had, it was one of Chester’s favorite places to visit in Cade Creek.
A vegetarian cheese omelet sounded like just what he needed before calling Yancy and asking the man to come into town so they could talk and he could explain to him how his life had gone so horribly wrong…and then ask for his help.
Chester didn’t even have enough time to scream as something hard and heavy slammed into the side of his car. The sound of metal on metal was horrendous, but it was better than the sound his vehicle made as it was crushed like a tin can—with him inside of it.
When the world stopped spinning, Chester found himself lying against the door of his powder blue VW Bug, his legs pinned by the steering wheel and the dashboard. Pain made his vision blurry as it exploded throughout every inch of his body. His very cells screamed in agony. Something warm and wet trickled down the left side of his face.
Chester made sure he didn’t move any more than he had to as he took stock of his injuries. His head ached but not as much as his legs. Tears sprang to Chester’s eyes when he was able to wiggle his toes. He wasn’t paralyzed but it was obvious from the amount of pain he was feeling that something serious was wrong.
There was a gash on the side of his head. Chester suspected that he had hit his head on the side window as the glass had shattered, most likely from his head hitting it as the car flipped through the air. There were some cuts on his face and neck, also most likely caused by the breaking glass.
“Are you okay?”
Chester turned to see a dark haired man looking down at him from the passenger side window, which strangely enough seemed to be the top of his car now. “What happened?”
“A truck ran the red light and hit you.”
Well, that would explain it then.
“I’m Kapheri. Can you tell me your name?”
“Chester.”
“Good.” Kapheri smiled. “Do you know where you are, Chester?”
“Um…in my car.”
Duh.
“True.” Kapheri chuckled. “Can you tell me where your car is?”
Chester almost said the street but he knew the answer the man was looking for. “Cade Creek.”
“Can you tell me what year it is, Chester?”
Chester frowned. “Really?”
“Afraid so.”
“Twenty fifteen.”
“Good, good.” Kapheri’s perfectly white teeth gleamed when he smiled. “Okay, an ambulance is on its way. Try not to move.”
“Thank you.” But he really didn’t have any plans to move any time soon. It hurt too damn much. “The driver of the truck? Was he hurt?”
“He walked away without a scratch on him.” A deep scowl crossed the man’s face as he looked up and past the car at something Chester couldn’t see. “The police should be here in a minute or so to take him into custody. The bloody bastard reeks of alcohol.”
Chester sputtered with bitter amusement. “I’m going to die because some asshole had too much to drink and decided to take a five ton truck for a joy ride?”
“Well, I don’t think you’re going to die, but…yes.”
“Is…” Chester licked his lips. “Is there anything left of my stuff?”
Once again, Kapheri lifted his head and looked beyond what Chester could see. “You might be able to salvage some of it but I’m pretty sure the trailer is a write off.”
“Damn.” He hadn’t taken the insurance clause out on it. In retrospect, that had been pretty stupid of him. He had been fairly confident of his own driving skills. He never dreamed he’d have to worry about some ass wipe with too much to drink ramming into him. “There’s snow in my car.”
“You hit a snow bank, Chester. There’s snow over fifty percent of your car.”
“Oh.” Chester screamed as he involuntarily tried to move his leg and a spike of pain ripped through his body that was worse than anything he had ever felt in his life. He was positive he was going to die because nothing that hurt this bad couldn’t be fatal.
“Ho-how far away is…is that ambulance?”
“Soon, Chester.”
Chester almost cried out when the man’s face disappeared. He wanted to beg the man to stay, to not leave him alone. But another face appeared, one that took Chester’s breath away with its sheer masculine beauty, and with the way he was panting that was pretty hard to do.
“Hey, I’m Jack. I’m going to help get you out of here.”

ADULT EXCERPT
Jack pulled into a parking spot down the street from Chester’s apartment and turned off the engine. He could see the lights on through the second floor windows. His lips curved into a small smile when he saw Chester’s shadow pass in front of the window. He glanced at his watch. He still had another twenty minutes before he was supposed to arrive.
Jack pulled out his cell phone and dialed Chester’s number.
Chester answered a moment later. “Hey, handsome.”
“What are you wearing?” he asked in a deep gravelly voice.
Chester’s laughter eased Jack’s nerves. “A smile.”
“Damn,” Jack groaned as his cock hardened just that fast. “I’d like to see that.”
“Maybe I’ll let you.”
Jack groaned again, palming his hard cock through jeans. It wasn’t enough, not when Chester laughed again, only this time, the sound was low and sultry. Jack quickly glanced around. The street was vacant, not a soul in sight. He sat near the end of the street, his truck shadowed by the building he was parked in front of.
It was enough.
Jack reached into the glove box and pulled out a few wet wipes he kept in there. He set them on the seat next to him and then unzipped his pants and pulled his dick out. He wrapped his fingers around his aching length and started slowly pumping his hand up and down. “Talk to me, baby.”
“What would you like me to say?” Chester asked in a silky voice that dug into Jack’s senses and sent his arousal skyrocketing. He didn’t know anyone else that could set him off as fast as Chester Bailey.
“Anything.” Jack pumped faster, tightening his fist around his shaft. He began stroking his length from root to tip. He ran his thumb over the moist head, smearing the pre-come around and squeezing lightly. Jack bit his lip as his pumped his hand to the rhythm his hips were setting.
“I could tell you how excited I am to see you tonight.”
“Oh, so am I, baby. I can’t wait.” His balls were starting to pull up tight to his body. A web of arousal spun around him as he squeezed his shaft, his thumb caressing over the leaking head. He growled when he felt the tingle shooting up his spine. He grabbed the wet wipes he had pulled from the glove box and held them over his cock.
Chester’s voice dipped even lower when he spoke again. “I’m not wearing any underwear.”
“Fuck!” Jack shouted as hot ropes of seed shot out of his cock, hitting him on his chest and under his chin. He smacked the dashboard as his dick jerked wildly in his hand and pumped ropes of cum into the wet wipes.
“Did you just jerk off?”
Jack chuckled. “Maybe.”
“Where in the hell are you?”
“Look out your window.” A moment later, the curtain moved and Chester’s face appeared in the window. “Down the street on your left.”
When Chester glanced his way, Jack raised a hand and waved.
“What are you doing out there?” Chester asked.
“Waiting until our date.” He glanced down at his watch. “I have another ten minutes.”
“You also have a police car coming up behind you.”
“Damn it!” Jack heard Chester laughing hysterically when he dropped his cell phone and started shoving his spent dick back into his pants and zipped them up. He just got himself smoothed down and everything cleaned up when a light shined into the window of his truck and he heard a knock.
Jack groaned when he turned and saw Deputy Nick Hale standing there with a flashlight in his hand. He rolled the window down, praying the deputy hadn’t seen his lapse in judgment. “Is there a problem, Nick?”
“No, just checking to make sure you were okay.”
“I’m fine.” He rolled his eyes when Nick scanned the interior of the truck. “I have a date in ten minutes. I’m waiting.”
“Uh uh.” Nick grinned. “And the flowers?”
“For my date.”
Duh.
“I see.”
“Well.” Nick chuckled with a great deal of amusement. “You have a good night then, chief.”
God, grant him restraint.
“You too, Deputy Hale.” Jack waited until Nick walked away before rolling up his window and then picking his phone back up. He could still hear Chester laughing hysterically. “It wasn’t that funny, Chester.
“Yes, it was.”
Posted by Stormy Glenn at 2:01 AM