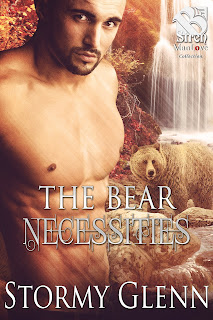 THE BEAR NECESSITIES
Bear Essentials 4
coming August 22nd
Enforcer Jeb Taylor found his mate in bear shifter Erik Thomas. He couldn't be happier. The man was sexy, smart, and funny. He wasn't happy that someone seemed intent on taking Erik from him. Helping his alpha establish a new clan wasn't easy, but losing his mate would be impossible.
Erik Thomas's life was one big roller coaster ride. He went from traveling home from seeing friends to being kidnapped to being rescued by the sexiest bear he'd ever seen. He'd get off the wild ride except that might mean giving up the best thing that ever happened to him.
When trouble comes at them from every direction, they have to learn to rely on each other and those around them to survive what might be someone's bid to take over the clan.
http://www.stormyglenn.com/thebearnecessities.htm