~~ $.99 ~~
On each day of each year (2006-2011), the following titles were released. We celebrate each anniversary date by offering a tremendous discount for a limited time. Enjoy them now! 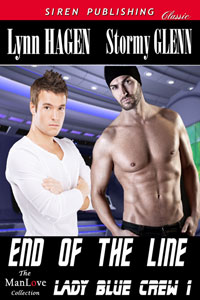 END OF THE LINE

Giovanni Gallardo is on the run. With only a knapsack in his hands, he boards a ship to get as far away from earth as he possibly can. When he arrives at End of the Line, things go south fast.

Remy Vystal is the commander of the Lady Blue. Kicked out of the Elite Force for something they didn't do, Remy and his crew travel the galaxy taking on missions to survive.

When a stowaway is discovered aboard, the fun has only just begun. Remy has found his mate in the little human, but Gigi is more than the crew is used to handling.

When they discover Gigi’s secret, the crew must fight to keep Gigi alive. Keeping Gigi safe from a replicator that’s possessed may be easier than keeping him safe from the one man who has called a bounty on all of their heads.