~~ $.99 ~~
On each day of each year (2006-2011), the following titles were released. We celebrate each anniversary date by offering a tremendous discount for a limited time.
Enjoy them now! 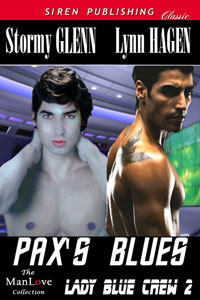 Paxton Chambers lived hand-to-mouth, doing things he despised to survive. When one of the crew members of the Lady Blue asks him to help out, Pax is quick to lend a hand.

Colt Walking Cloud is a member of the Lady Blue crew. He's fast, quick, and quiet, a deadly weapon with a sniper rifle. When he discovers that the little blue man is his mate, Colt goes on the hunt.
Pax can never understand what anyone is saying. He thinks his intelligence is under par. Colt takes him under his wing and shows him a life Pax never dreamed of having.

When Lady Blue is infested with slug-like worms with a lethal mucus, it’s up to the crew to irradiate them. The only thing stopping them is the fact the Pax has taken a liking to them and will do whatever he can to save them, even launch the escape pod.